BOSTON — Gov. Charlie Baker — a vocal advocate for one of the four questions on November’s ballot who is looking to defeat another — outlined on Monday his thoughts on the other two initiatives, leaving a question mark over his stance on restricting farm animal confinement.

Voters in the Nov. 8 election will be faced with four statewide questions: one that would allow an additional slots parlor; one allowing education officials to authorize up to 12 more charter schools each year; one requiring that all eggs sold in the state come from hens that have enough room to stand and turn freely; and one legalizing and regulating the adult use of marijuana.

Baker on Monday said he plans to vote against Question 1, a carefully worded addendum to the state’s expanded gaming law that would favor licensing a new gambling facility at Suffolk Downs. 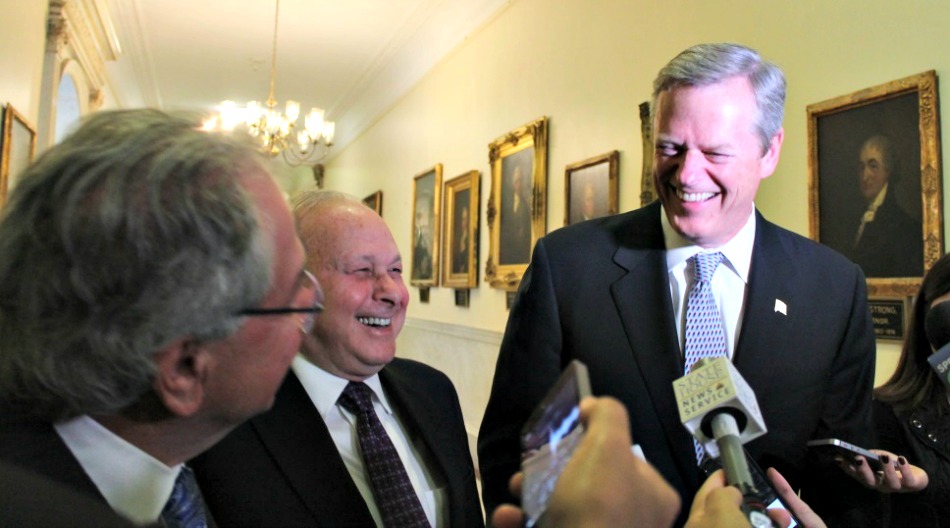 Gov. Baker told reporters on Monday he would be attending multiple campaign events for state lawmakers Monday night and would watch the presidential debate at a later time. Senate President Rosenberg suggested he drop some of the campaign events, to which Speaker DeLeo added, “Unless you’re going out for some Democrats.”

“I get the fact that they’d have to go back through the Gaming Commission on this, but, you know, we have one slot parlor in Massachusetts, we have two very significant casinos that are going through, that are actually into construction at this point in time,” Baker told reporters after meeting with House Speaker Robert DeLeo and Senate President Stan Rosenberg.

Check out video of Baker’s remarks after the jump.