Football recruiting gurus won’t be confusing Central Massachusetts with North Texas or South Florida anytime soon, but the region annually produces multiple Division I prospects — and this year might be the area’s most talented class in some time.

From Leominster to Dudley to West Boylston, Worcester and its surrounding communities already boast four Division I FBS commitments, and another may be on the way shortly, albeit with a slight detour:

Kevin Mensah, a star running back for Holy Name who rushed for more than 1,500 yards last season, decided earlier this month to transfer to Shepherd Hill Regional in Dudley for his senior season, he said, for a better shot at that top-level scholarship. Of course, a 4.4-second time in the 40-yard dash won’t hurt either. [Scroll down to find out which FBS colleges are already checking him out.] 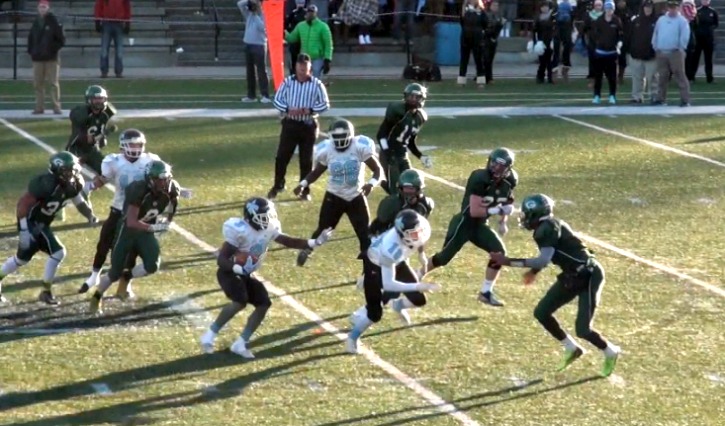 Kevin Mensah, center, carries the ball for Holy Name last season against Grafton. Ifeatu Melifonwu, right, gets in position to make the tackle.

Here’s a look at the top college football prospects in Central Massachusetts:

Many thought Grafton High incoming senior Ifeatu Melifonwu would follow his brother Obi, a redshirt senior defensive back at the University of Connecticut, but he’s instead chosen to carve out his own path at Syracuse. At 6-foot-3 and 180 pounds, Melifonwu is similar in height and length to his brother, and that size made him attractive to the Orangemen.