Any important long-term goal requires perseverance and hope. Whether it’s finding the right job, attending college, or finishing a seven-mile road race, the Worcester Genesis Club is there to provide the starting point for its members to dream big and finish strong.

Genesis Club, an agency offering a wide range of services for those suffering from mental illness, has had a home in Worcester on Lincoln Street since 1988.

“To help people with these disorders, it takes establishing a stable foundation,” said Kevin Bradley, the clubhouse’s executive director. “We want to help members [get] back to work, get back to housing, and get back to being a part of the community.” 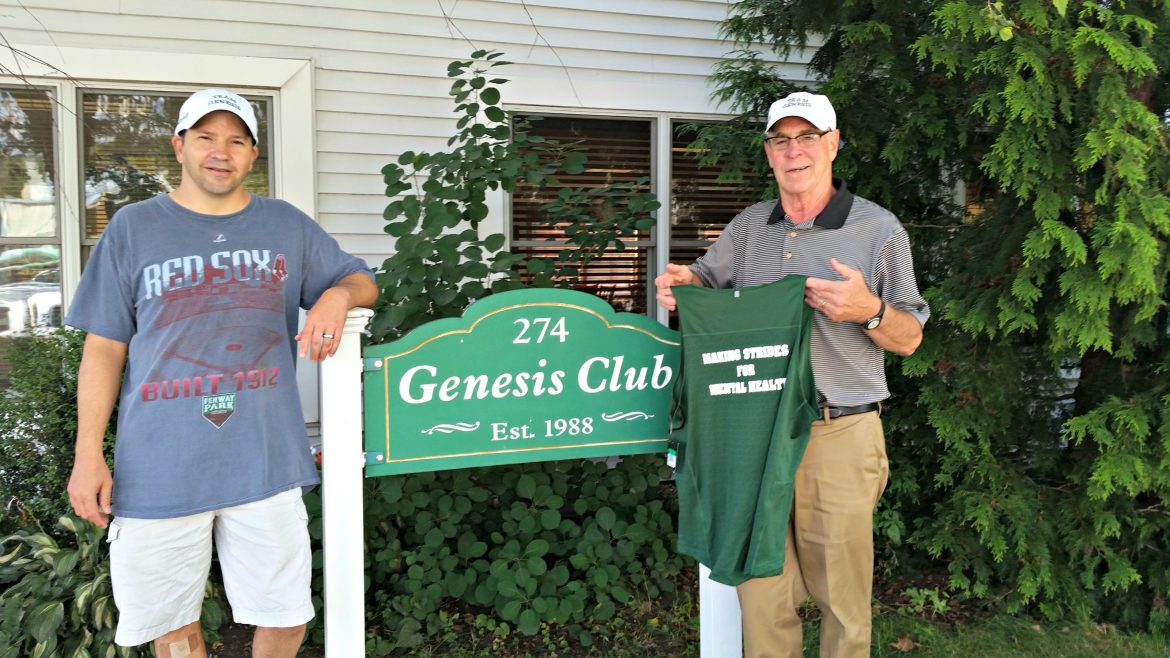 Therefore, the club focuses on establishing a baseline of healthy routines, time and stress management skills, finding gainful employment, and having a sense of belonging; things that anyone can take for granted until they are forced to go without them.

Like a couple decades fewer to look forward to, for instance.

“People with mental illness have a 25-year earlier mortality,” Bradley said in reference to data from the National Alliance on Mental Illness. “It’s not something people like to talk about, but it’s an important issue.

“If you have mental illness, you live to around 60, usually due to poor diet, poor physical health, and a sedentary lifestyle,” Bradley said.

Additionally, staffers noticed that even when members were improving behaviorally, their lack of stamina prevented them from living the life they wanted. “Members were doing well psychologically, but physically couldn’t work more than two hours,” Bradley noted. “We asked, ‘Is there something we can do to help?’”

So, Bradley initiated an exercise program for members at Assumption College, which he says was “a great success” from the start. This would later become a feeder program for Team Genesis, which has seen club members, family, staff and even psychiatrists join.

Aug. 21 will mark the 10-year anniversary of the team running the Falmouth Road Race, which stretches over seven miles of coastline and hills from Woods Hole to Falmouth, to raise funds for the clubhouse.

What started with but 14 runners has become a 42-person brigade, which has collectively raised $50,000 this year (about enough to serve 20 members this year).

[There is, however, still room for three more runners on the team for anyone willing to join, Bradley said, as long as they’re in shape and can raise the minimum of $750 for the entrance fee.]

Along with fitness, and fundraising, the club wanted to raise public awareness of its work and goals, and the populace it serves. Now, each team member runs with a green racing singlet emblazoned with “Genesis Club” and the slogan, “Making strides for mental health.”

Bradley said the team’s efforts draws a lot of positive attention from people at the race. “Lots of people come up to [us] and ask questions about what we do,” Bradley said, adding that many are curious about mental health parity and services themselves. “We try our best to answer and refer them to their nearest clubhouse.” 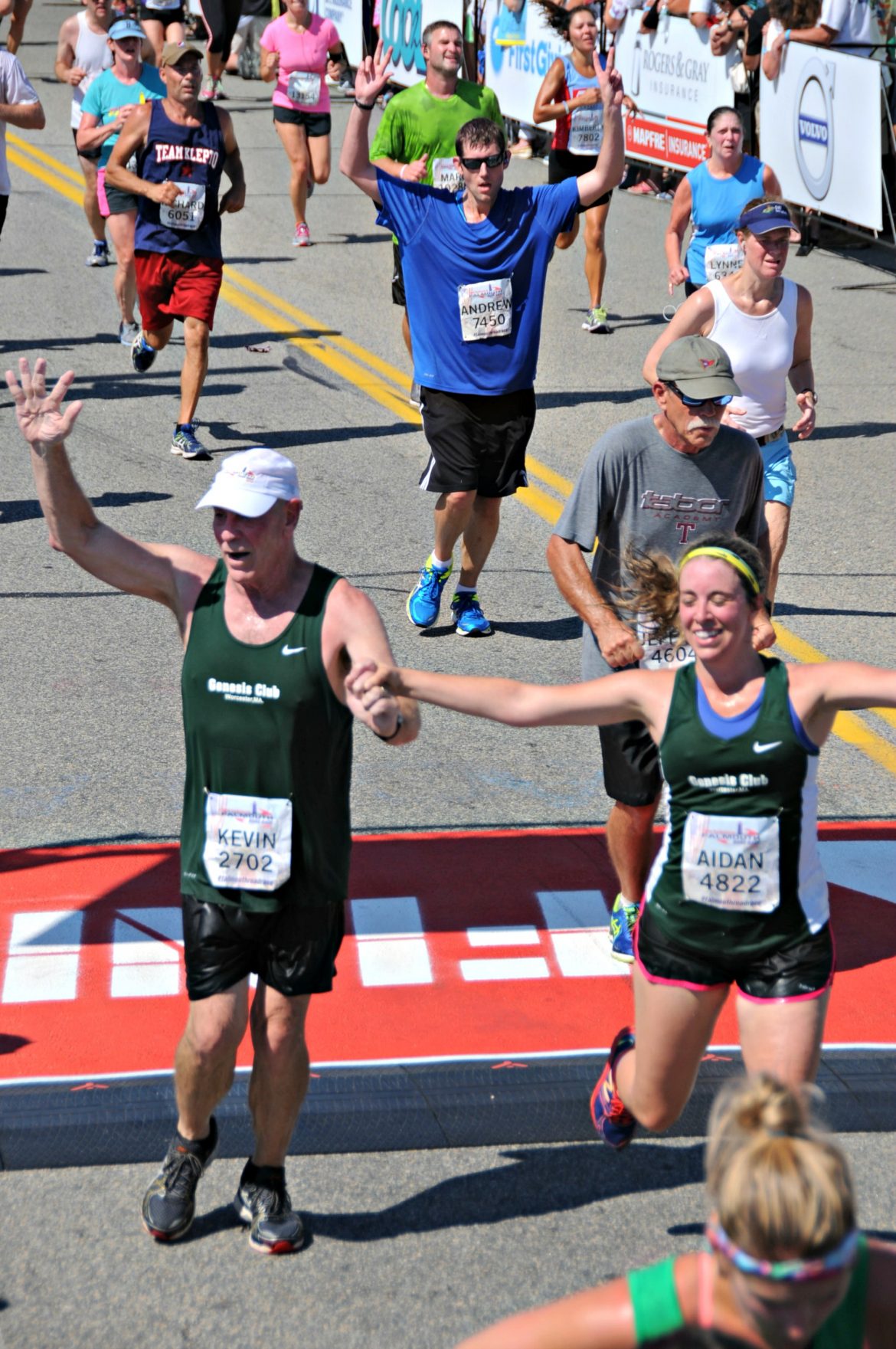 Being a member has its privileges … and its responsibilities.

One becomes a member initially through referral, application review and three-day orientation. Genesis Club “is open to any person diagnosed with a mental illness.”

After an initial assessment by staff, members are connected with housing, counseling, education assistance, and employment opportunities as needed. Inside the clubhouse itself, members and staff help with everything, from cooking to cleaning.

A daily task list outlines everything that needs to be done to maintain the clubhouse, prepare food and keep things running. Club members volunteer to help, and whichever task they choose, that encourages everyone to take initiative and feel ownership in the organization.

“We begin to see improvements in their confidence and ability to balance things within the first three months,” Bradley said.

Additionally, the clubhouse’s staff members provide employment counseling and job placement assistance. “We help them address gaps in employment, advocate for them, and rebuild their resumes as well as their stamina,” noted Sarah Brown, a certified rehabilitation counselor and staff member in the clubhouse’s career development section. “The staff trains them for interviews and for the job, and advocates for them with employers.”

Even more impressive is the level of responsibility staff members show for these members. “If they don’t show up for work, the staff covers the shift for them,” Brown said. “But, they seldom miss work.”

Consider that the national unemployment rate for mentally ill people is 85 percent.

The employment program enjoys relationships with some of Worcester’s largest employers, including University of Massachusetts Medical School (who they also conduct mental health outreach with three times a week), Worcester Art Museum, Saint-Gobain, Worcester Public Library and the city of Worcester. This led to members earning about $1.5 million in wages in fiscal 2015, according to the club.

Perhaps most inspiring, however, is where many members seek employment opportunities. “A lot of members look for employment in mental health, social work and substance abuse recovery,” Brown said. “They feel like they can help. A lot of members want to work in these fields because they can speak to the issues.”

Staffers also see many former members returning to continue helping out. “I wanted give back to the club,” said Peter Dixon, who ran with the club’s race team two years ago and has volunteered with Genesis Club for 11 years.

Additionally, the Genesis Club encourages members to pursue (and finish) their educational pursuits, which is not an easy feat for many struggling with mental illness. A lack of time-management skills or the ability to cope with stress leads to a 65 percent failure rate for the mentally ill in their first semester of studies.

Genesis Club staffers addressed this by talking more with members about time management, and conducting outreach with the various schools’ professors and disabilities services departments.

“Now 98 percent of the 35 members who went to classes completed their first semester,” said Brown. “It was about half of that before.” Quinsigamond Community College, Mount Wachusett Community College, and even the Rhode Island School of Design have all been supportive in members’ academic pursuits.

But members aren’t the only ones receiving training and education at the Genesis Club. The Worcester clubhouse is also an annual training site, and has hosted clubhouses from all around the world, including Norway, South Korea, Australia, Ireland and Scandinavia. Staffers train foreign visitors in outreach, education and advocacy to replicate this model at home. “After the training, we go to them and give an on-site consultation,” said Bradley.

Bradley, who originally worked in the organization’s Pittsfield clubhouse, was later asked by the board of directors to start one in the heart of the commonwealth. “There are 35 clubs in Massachusetts, but the Genesis Club is the only one of its kind in Worcester,” he noted proudly.

In 1948, the organization started as the Fountain House in New York City. The clubhouse model was geared toward psychosocial rehabilitation for people suffering from serious mental illnesses such as schizophrenia and bipolar disorder. Since then, more than 400 clubhouses have opened all over the world.

Bradley, who previously ran for team Dana-Farber with his daughter Aiden, admits that he actually isn’t a cross-country runner.  “I’m not really a day-to-day runner,” he laughs. “I just train for this race.”

At 65, though, his family constantly urges him to relax. “For the past five years they’d tell me every time that this race is my last one.”

Yet every year Bradley is there at Falmouth with his team to run with them, cheer them on, and reach out to the community as an advocate for greater mental health care.

“You don’t have to be ashamed because you have mental health issues anymore,” Bradley said. “There was once a time we couldn’t talk about cancer; you had to say ‘the C word.’ But now, the advocacy and solidarity can help remove the stigma and help people find a way to recover.”

As such, Bradley implores people to reach out to those in need when life becomes difficult for them.

[Donations to the team (and the club in general) are always appreciated. “All donations go directly into the wellness program,” Bradley said. “There’s no cost for the members to come here.” Bradley recommends giving donations in-person to the club, or mailing them to 274 Lincoln St., Worcester, MA 01605.]