After much tribulation and with almost no end in sight, the builders at Technocopia finally put it all back together.

Nicholas Bold, Kevin Harrington and Alex Camelo started as three classmates from Worcester Polytechnic Institute with a passion for automation, robotics and creativity in their application. They would later form Neuron Robotics in 2008, a consulting and education company designed to inspire a similar passion for robotics in others, and to assist employers in making their operations more efficient. 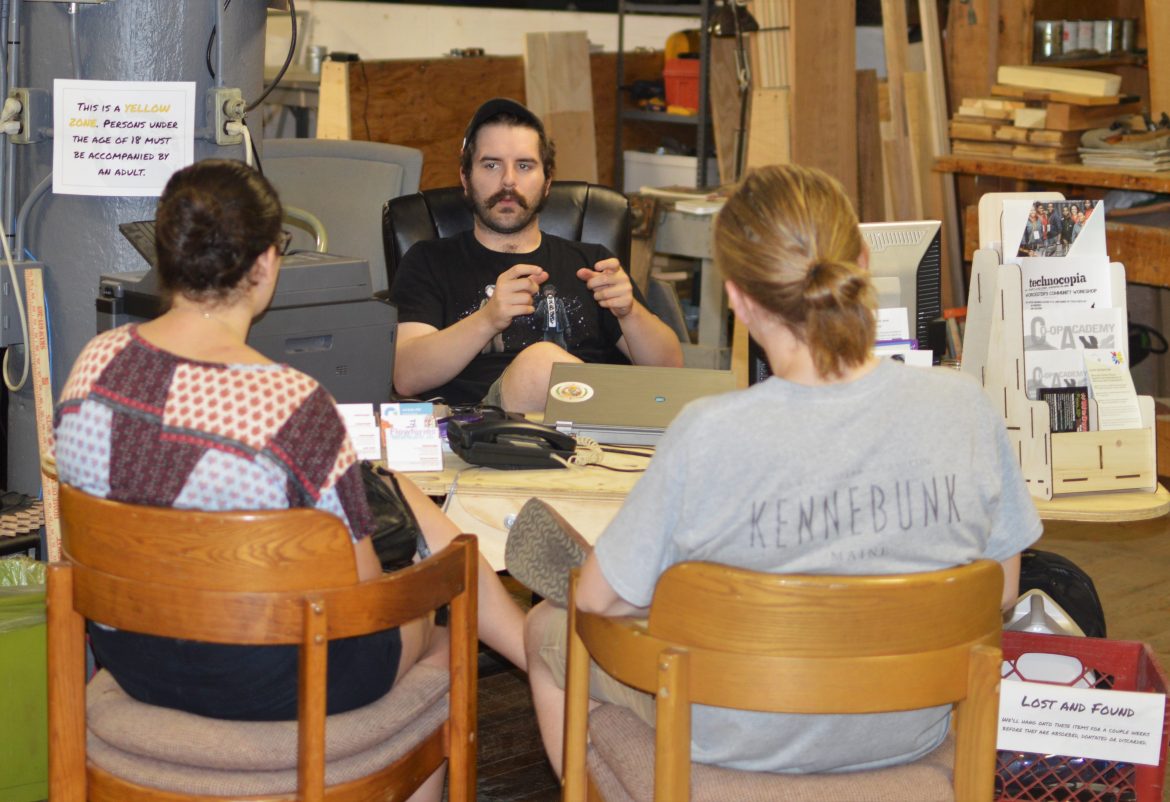 Nick Bold of Technocopia, center, meets with prospective members at a recent Open Hacks and Craft night, 7:30-10 p.m. every Thursday.

Their initial attitude toward what they define as “capital equipment,” machines designed to assist in production and reduce human labor, was that the life of the everyday person would be enhanced.

“The idea was that the less people had to work, the more time they would have for leisure activities and education,” Harrington said.

“Now you don’t have to do that work which you automated,” Bold said. “You can work on other stuff instead.”

In reality, though enterprising, their contracting experience also left them feeling disillusioned when one client, whom they left unnamed for professional reasons, laid off 30 of its workers after hiring Neuron to help automate their processes.

“We had this idea about the impact of robotics when it automated a manual process,” Bold said. “We were reassured that workers wouldn’t be fired, but approximately 30 workers lost their jobs.”

Though the members of Neuron Robotics were simply doing what they were hired to do, and with the assumption it would only help the company without threatening jobs, it still left the team feeling dissatisfied with the application of their talents.

“In the end, it came at the hook of us doing our jobs, and the company paid us a pittance,” Bold said. “We didn’t gain a livelihood by the 30 we destroyed.” 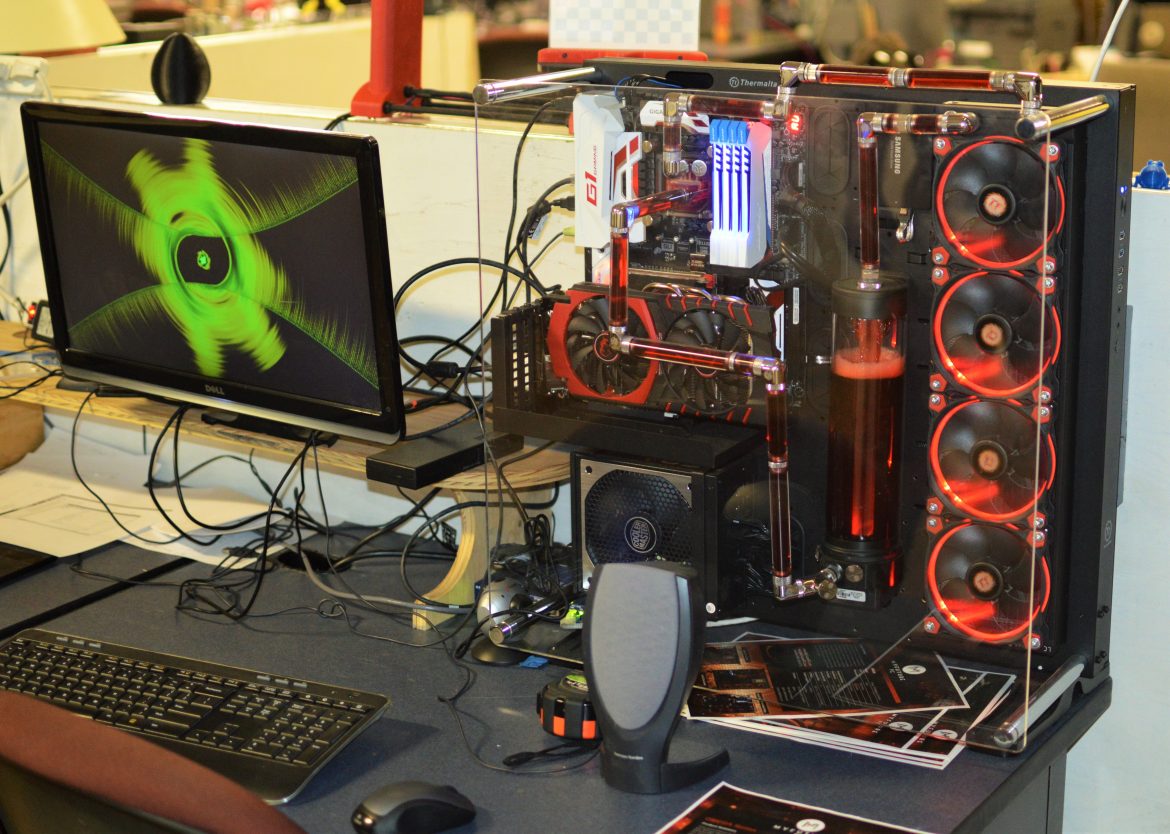 Among the equipment at Technocopia is a new Level 3 water-cooled MyFuturePC.

So, the group focused on bringing people together to create projects that would enrich lives rather than threaten jobs. In 2013, with the help of WPI, Clark University and the Worcester Roots Project, their idea would later become a reality, and their own automated greenhouse was installed at Worcester Roots on King Street.

The idea came from their quest to build a self-sustaining farm using automation. A farm managed by robots/automated systems would eliminate the need for human labor, and wouldn’t have the barriers to entry that other business ventures may such as oil or mineral exploration. The greenhouse uses robots to maintain the farm, check mineral levels, and keep things growing.

“Everyone has air and water, which makes this accessible to the common person,” Harrington said.

This concept would later encourage the group to start a makerspace at 95 Prescott St. with their leftover Neuron Robotics equipment that same year. They wanted to establish an environment where like-minded people could congregate, share resources, and build things together. “As we got going, it codified this idea; that’s why we wanted to name it Technocopia,” Bold said. “The utopian society that technology built.”

The initial launch, however, was not without its difficulties. Paying their overhead costs was a constant battle, and they were trying everything they could to keep Technocopia going. “We had to either raise revenues or reduce cost,” Bold said. “When we reduced cost, we still had a lot of equipment we didn’t use.” 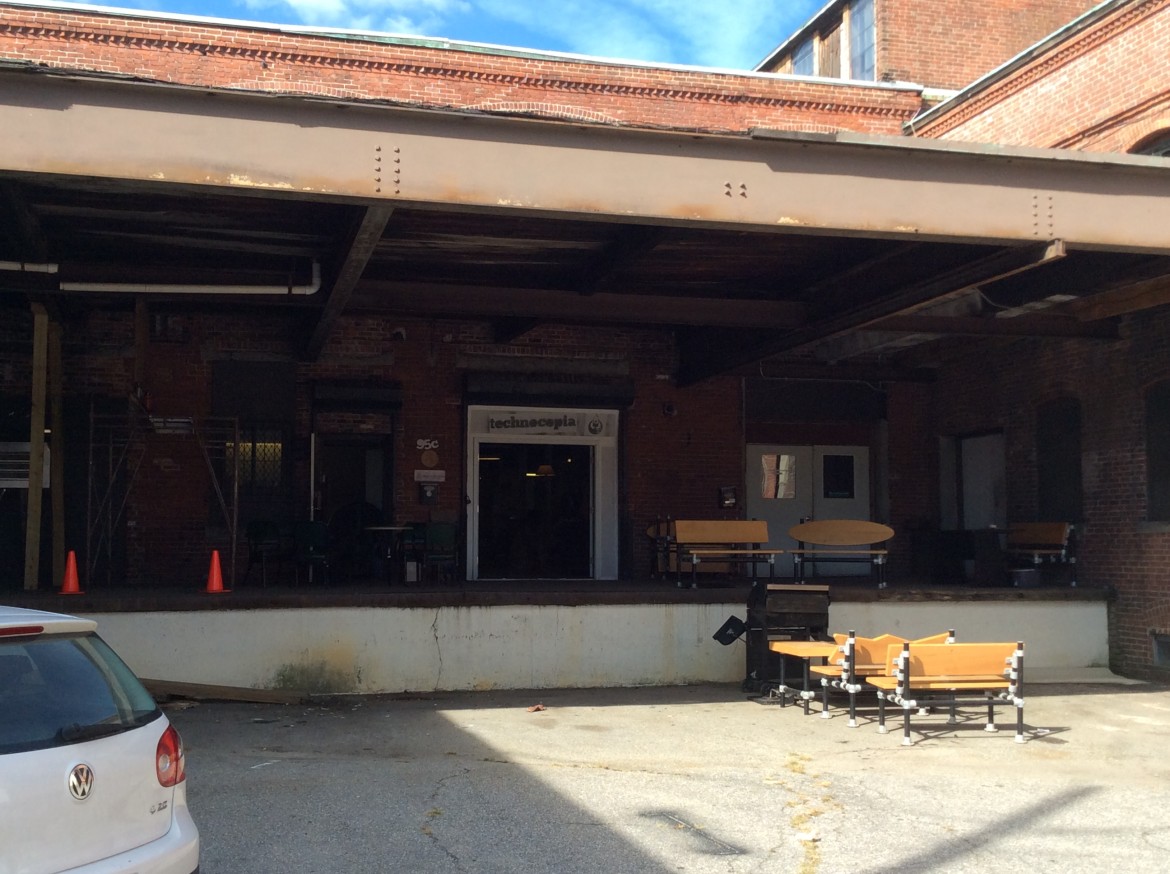 So the Technocopia crew called a bunch of friends from WPI who either donated funds and materials or helped hands-on. The group also billed their venture as a nonprofit to build a community and accept donations. They raised about $18,000 through an Indiegogo page, but it wasn’t enough to keep the project going.

“There was a bit of an impetus to do more,” Bold said.

After two years of hard work and creativity, their makerspace was established, but their building was falling apart.

Serendipitously, the crew ran into friends from the 97 Webster St. artist collective who were dealing with an equally unsatisfying situation. “The people there were working, living and playing out of this commune, but they had issues with consistently paying rent,” Bold said. “Entrepreneurs were impacted by members who were going in the opposite direction.”

So, in 2015, with a shared vision and support from other members, they set out to find a new location and revitalize their effort to make a creative and educational space. “We could teach others and take care of ourselves because we had more money,” Bold said. “We were making genuine progress bringing in more people to help, and we didn’t have to go at odds with anyone to make this happen.” 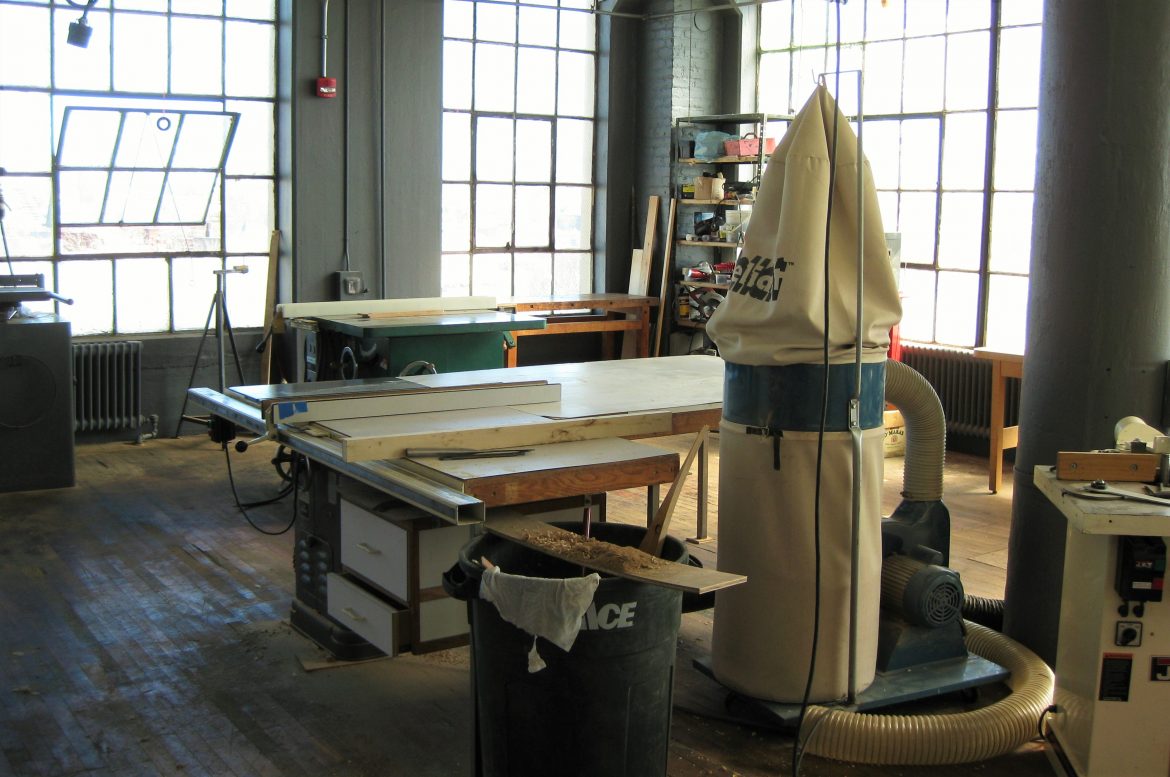 The woodworking shop at Technocopia

Along with members of the artist collective, the Technocopia crew on-boarded Ian Anderson Woodworking and the Worcester Think Tank, an education program that offers math and science classes to school-age and adult learners.

According to Bold, the crew brought in Think Tank because “they have a very high level of quality that they’re known for.” The group was equally enamored of the work of Ian Anderson, who uses nothing but hand tools to build framework for houses.

After coming together, the group weighted its priorities toward “a professional space,” which would later become their location at 44 Portland St. in the old Printers Building.

But like Hercules setting out to kill the Hydra, when one head was destroyed another two would rise in its place.

The Technocopia crew would have to struggle with a seemingly endless number of pitfalls, setbacks and obstacles before achieving their ultimate goal.

They originally estimated their quest for permitting would take a mere three months. According to Bold, they “pulled the trigger in October” of 2015, and thought everything would be done by the end of the year, “with some tasks overlapping into January 2016.” Instead, for every task that was completed, another hindrance emerged.

“The building owners wanted us to use their own architect,” Bold said. “The landlords did everything and paid for it.” But after the initial inspection, a number of items were not up to code, and so the crew had to coordinate to hire contractors, plumbers and electricians to address each issue identified.

“We could only build half a wall then inspect the wires, then we had to inspect the piping,” Bold said. Then they could finally start building bathrooms that complied with standards set by the Americans with Disabilities Act. “After that, we needed to install an ADA compliant bubbler.” 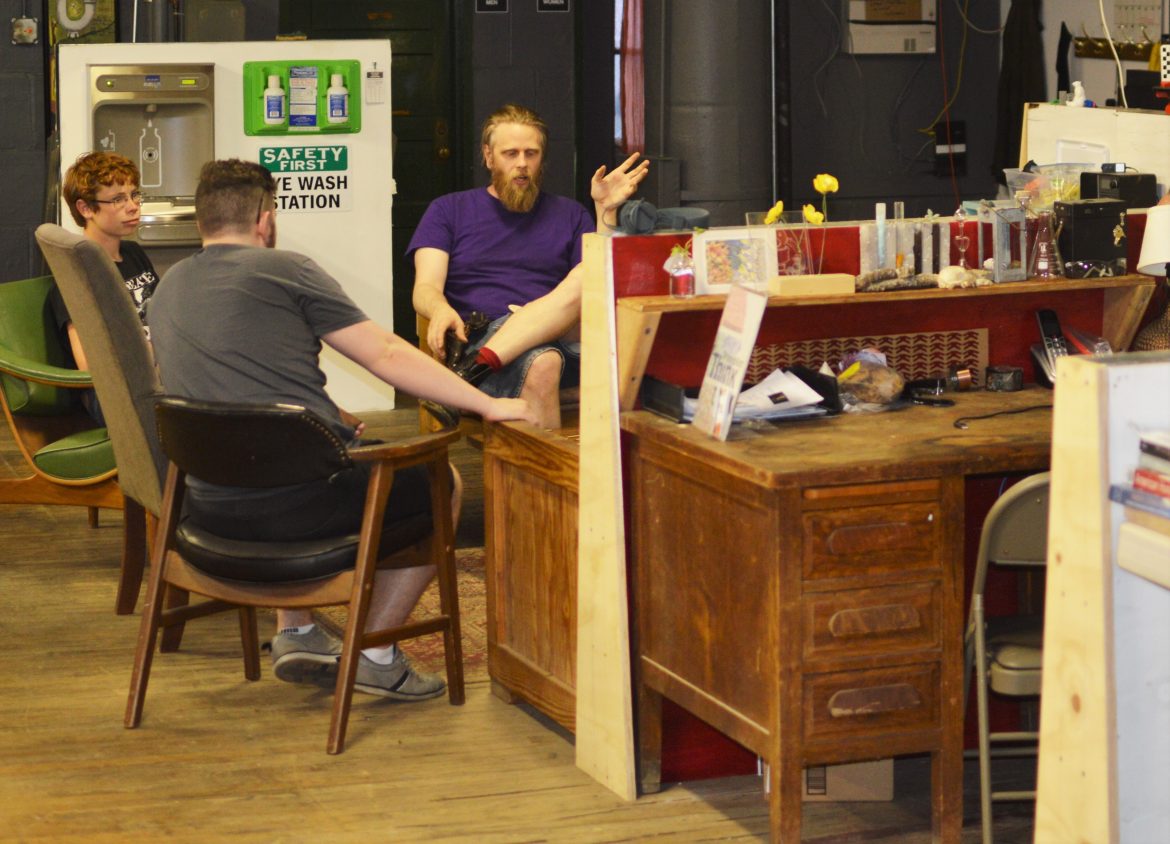 Kevin Harrington of Technocopia, center, chats with visitors at a recent Open Hacks and Crafts night.

“The diameter of the last two meters at end of the old pipes in the printer building was deemed too narrow, so we had to bring in a plumber,” Harrington said. “Each renovation would trigger something that triggered another inspection.”

Their initial “finish” date of Jan. 1 would come and go, but they still had to wait on permits to move forward with their certificate of occupancy so they could build Technocopia and let their members get back to work. Because many members used their old makerspace for their own businesses, the delay threatened many of their livelihoods.

With their own revenues and businesses on the line, many members began to leave to pursue other options, and Technocopia’s membership dwindled.

“About 50 percent of (our) members stuck it out,” Bold said. “Six months was unbearable to be offline that long. Many members relied on the makerspace to run the workshops for their personal businesses, and it was too much of a sabbatical.”

But finally, on April 1, four months after the date they anticipated, the Hydra was defeated, and the Technocopia team earned its certificate of occupancy. “I don’t know how we made it that long,” Bold said. “It’s a good thing we sell memberships instead of pizzas,” he said with a laugh. 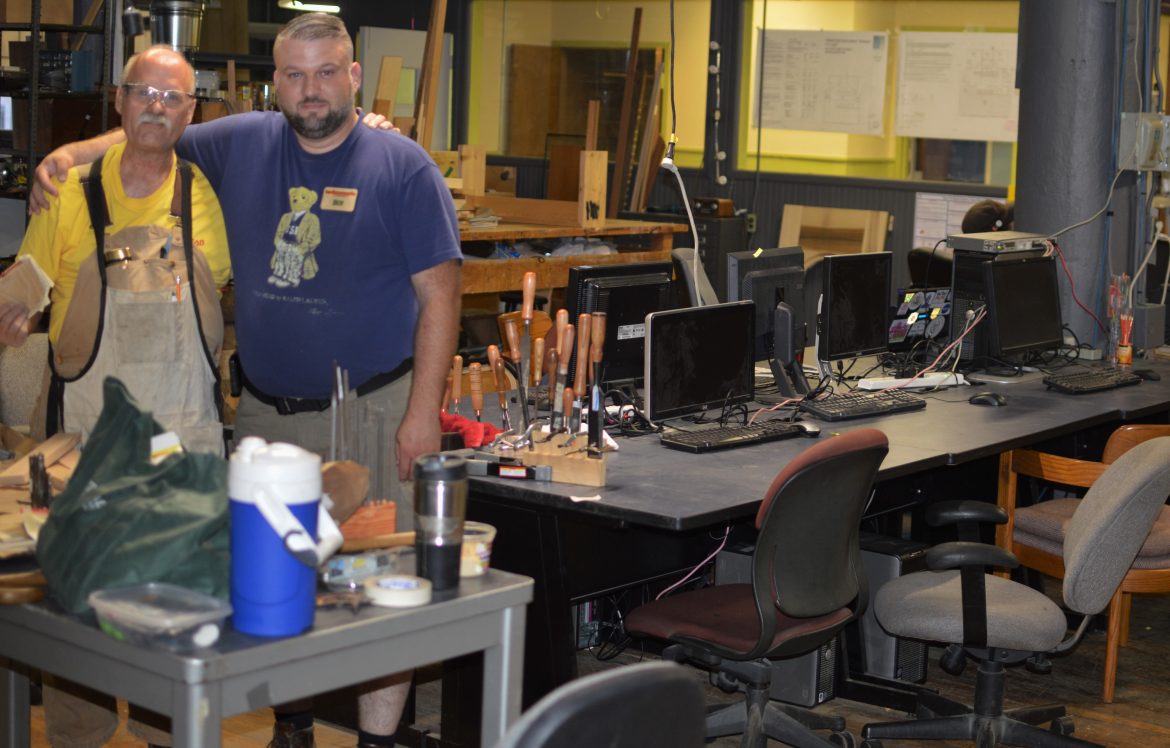 Now, Technocopia space is open again, stabilized, and the group is planning for the future. Besides funding from memberships, Bold said the group is nearing the goal line on an $84,000 grant to further outfit the space

Technocopia’s current setup boasts an open classroom space with Macbooks, a 3D printing section with a “red devil” 3D scanner, a woodshop with professional-grade tools, a CNC router, and multiple private “cubes” for members to rent. Everything there is designed to welcome the crafty and creative, as well as anyone who wants to learn more about building things.

The team also has an electronics assembly station whose inventory is based on the “leave a penny, take a penny” principle, where members may borrow whatever they want but must trade it for “something that was as useful to you,” as Harrington puts it, rather than an item of similar monetary value.

Finally, in the center, along with a common area for members to congregate and a storage cube for the remaining equipment at Neuron Robotics, the space houses a large card catalog given to Bold by his grandfather. Bold uses it to house various small parts, nuts, bolts, and other miscellany for members to share.

“I wish he could have seen this,” Bold said. “He would have loved it.” 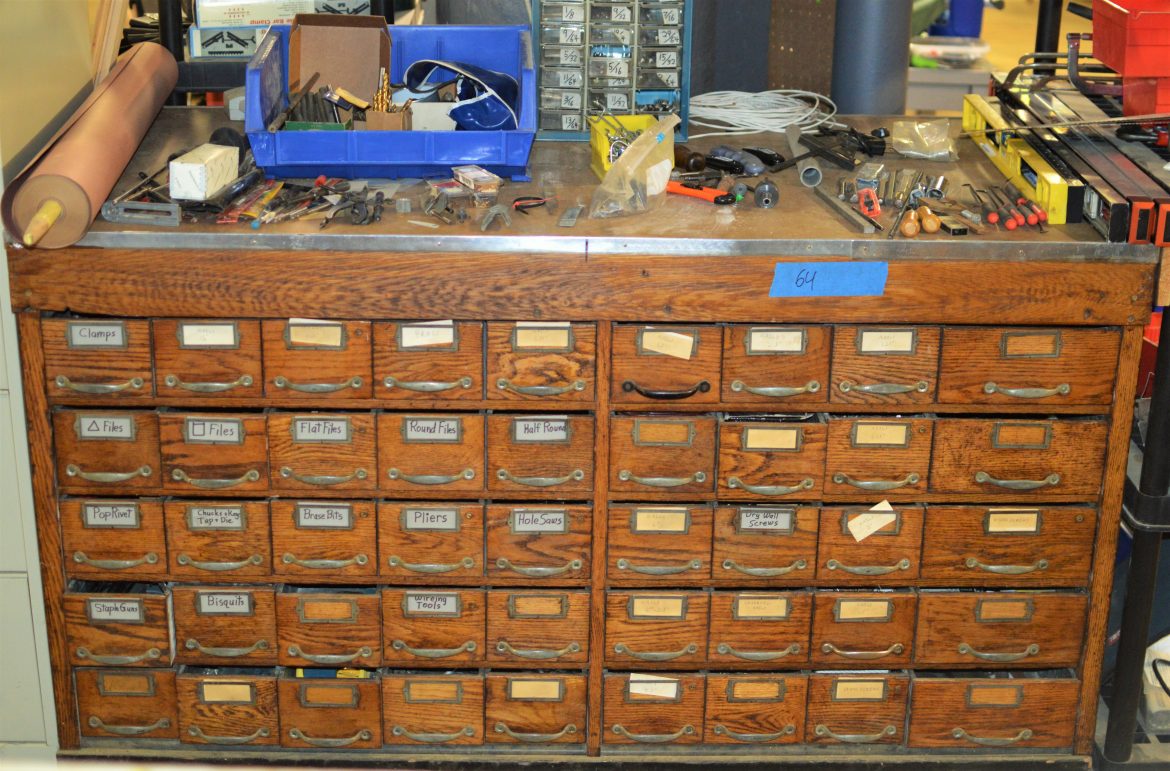 A large card catalog given to Nick Bold by his grandfather now serves tools and parts at Technocopia.

For the future, the Technocopia founders plan on bringing in more members and instructors and to keep their makerspace growing. They also plan on developing the other half of the space to accommodate additional cubes and a glass shop.

Membership at Technocopia is divided into three separate plans: “business hours” or a “nights and weekends” plan for $75 a month, and a “24/7 access” plan for $125 a month. Members get access to anything in the makerspace as long as they are trained on certain tools, and are given a keycard for controlled access to the building. In order for people to get their money’s worth, Harrington advises future members: “Get your tool training out of the way before you purchase your membership.”

And so, after months of hardship, Technocopia is finally back in Worcester, making the team’s hard work a story of struggle and triumph, rather than one of despair. Now, they look to the future, and hope to share their creativity and knowledge with others.