For kids everywhere there’s nothing quite like hearing that inimitable sound of an ice cream truck getting ever-closer to your neighborhood.

For Worcester kids, though, one man has been steering those jingles up and down the seven hills, causing boys and girls to sprint inside for money and back out for a lucky place in the line for the past 54 years. 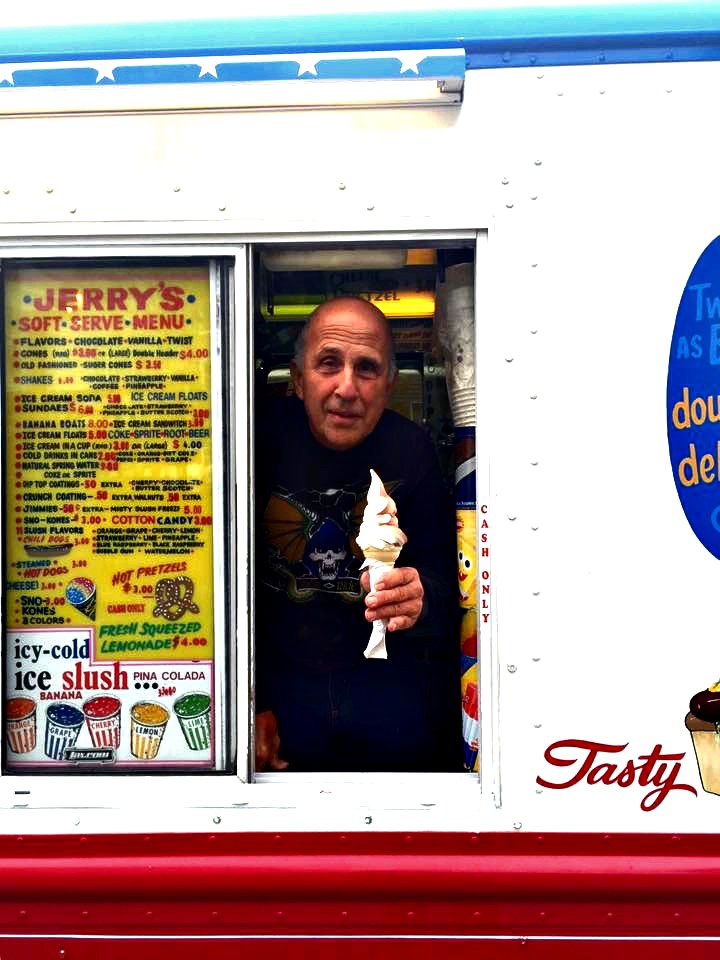 Since 1962, Jerry Bianculli, a Grafton Hill lifer, has been serving frozen treats and novelties out of his ice cream truck, Jerry’s Famous Soft-Serve, in and around Worcester at baseball and softball games, outdoor concerts, fairs and myriad other events.

Bianculli declined to reveal his age, but he said he attended Grafton Hill Junior High and graduated from Commerce High School, which shuttered in 1966.

So what’s the secret?

“Hard work and knowing the value of a dollar,” said Bianculli, who grew up on Cutler Street — “Popcorn Alley” because the kids in family all grew up selling popcorn. “I’ve served so many people from Worcester, from high school and college students that are now police officers, firefighters, doctors and nurses in Worcester.”

The first ice cream trucks in the country were implemented by Good Humor in 1920 in Youngstown, Ohio, and the first known soft-serve truck (Mister Softee) appeared in Philadelphia on St. Patrick’s Day in 1956.

Bianculli’s two red, white and blue trucks with images of ice cream sundaes, hot dogs and a variety of other novelties and snacks can be found scooting around Central Massachusetts, north to New Hampshire and west to the Berkshires. Flea markets, car shows, wherever someone might want an ice cream. So, y’know, everywhere.

Every year since the early 1980s he can be seen at the fireworks display on July 4 at Cristoforo Colombo (East) Park on Shrewsbury Street. 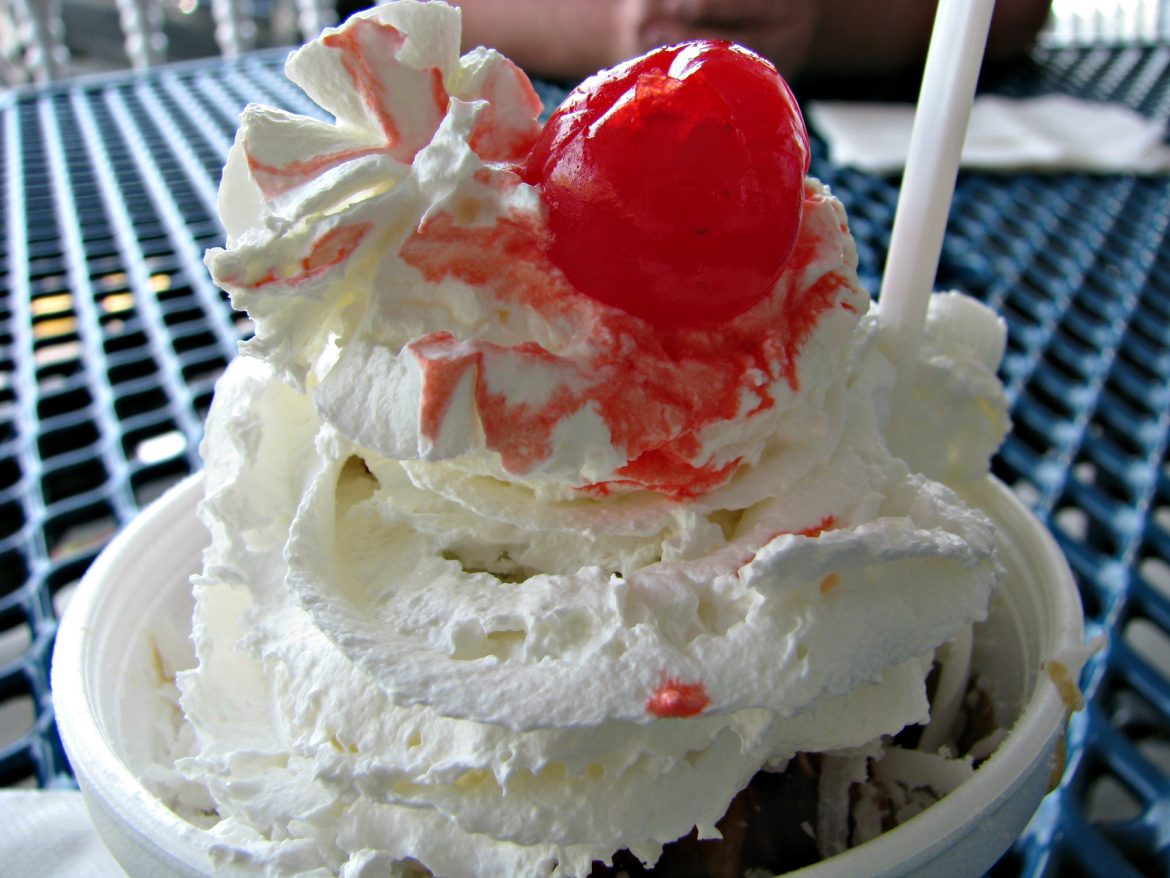 Nick D’Andrea, secretary-treasurer for the East Side Babe Ruth baseball league said, “[Jerry’s Ice Cream truck] is the indication that the ‘warm’ weather is here.  If I am at a ball field, an outdoor concert or just walking through the neighborhood, you could spot Jerry’s truck.“

According to Bianculli, he receives four or five calls a day to be at places in and around Worcester.

“I can only be at so many places in a day, so I only take the calls that can fit into my schedule,” he said.

“It’s remarkable. Growing up and playing T-ball through Senior Ruth ball, I would always see Jerry’s truck at my games,” said Christopher Lloyd, an official with Tom Ash Little League and a father of three boys. “Now, my kids are playing T-ball and minor league, and Jerry is still showing up to their games.

“The ice cream is as delicious now as it always has been,” Lloyd added. “The only thing my kids are disappointed about is the tragedy that Jerry no longer sells WW[E] ice cream bars.”

In 1962, Bianculli inherited the truck from his uncle Phil Gigliotti — who took the business over from several other ice cream truck drivers over the course of many years, according to Bianculli.

Now, Bianculli, who served six years in the U.S. Army Reserve, is the sole proprietor and owns two trucks. 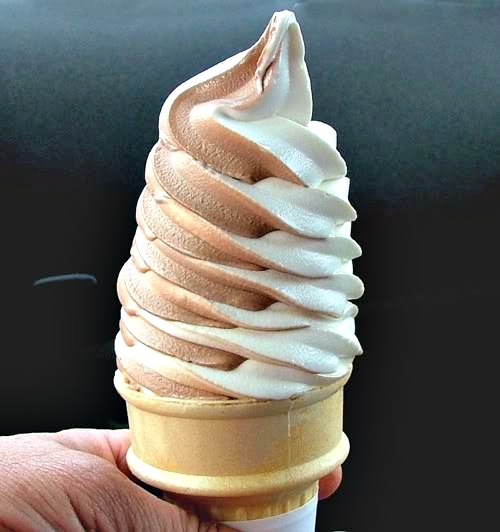 “No one drives the trucks but me. It has been that way from the day I started and will be until the day I pack it in,” Bianculli said.

Even though he would like to retire someday, Bianculli said he’s not quite ready yet. When he does retire, he will hand over the business to his two sons, Jerry and Billy, his daughter, Gina Fields, and his son-in-law, Rich Fields.

His children are all in their 40s and all live in the Worcester area. He has two grandchildren, Gianna 11, and Camden 8.

Most events it’s just Bianculli behind the window, but there have been times when Bianculli’s wife, Diane, or three children have lended a hand to help him out.

In fact, Diane Bianculli goes by the nickname “Cotton Candy Queen” because she handles the cotton candy machine at any event that requests it.

“She’s the main brain behind the operation. She’s the bookkeeper and she pretty much runs the company,” Bianculli said of his wife of 49 years. “My kids answer to her when they’re working for me. She’s the boss.”

The most popular items, according to Bianculli, are the $3 ice cream with jimmies, and the cherry slushies.

“The ice cream with jimmies is the hottest item always. And always has been. The cherry slush is by far the number one flavor,” Bianculli said.

If you’re looking to grab an ice cream from Jerry’s today, you can find him at Lake Quinsigamond the next two Sundays for the Regatta races until 6 p.m.

“The best part of my job is seeing a smile on people’s face and knowing that I could make them happy,” Bianculli said.

This article was originally published in the May 15, 2016 edition of the Sun.