Perseverance, moral support, a strict regimen and the sheer desire to achieve are necessary too. With a strong family background as his foundation, Kenneth Adusei, a former at-risk student now choosing between Harvard, MIT and Yale, has built an extraordinary platform of educational achievement.

“When we came from Ghana, I was sent back to Ghana to live with my father for two years and when I returned [to Worcester, at age 5], I started school and struggled to adjust. I remember the morning I received my first report card and I gave it to my mom but she wouldn’t take it,” laughed Adusei, a senior at South High Community School. 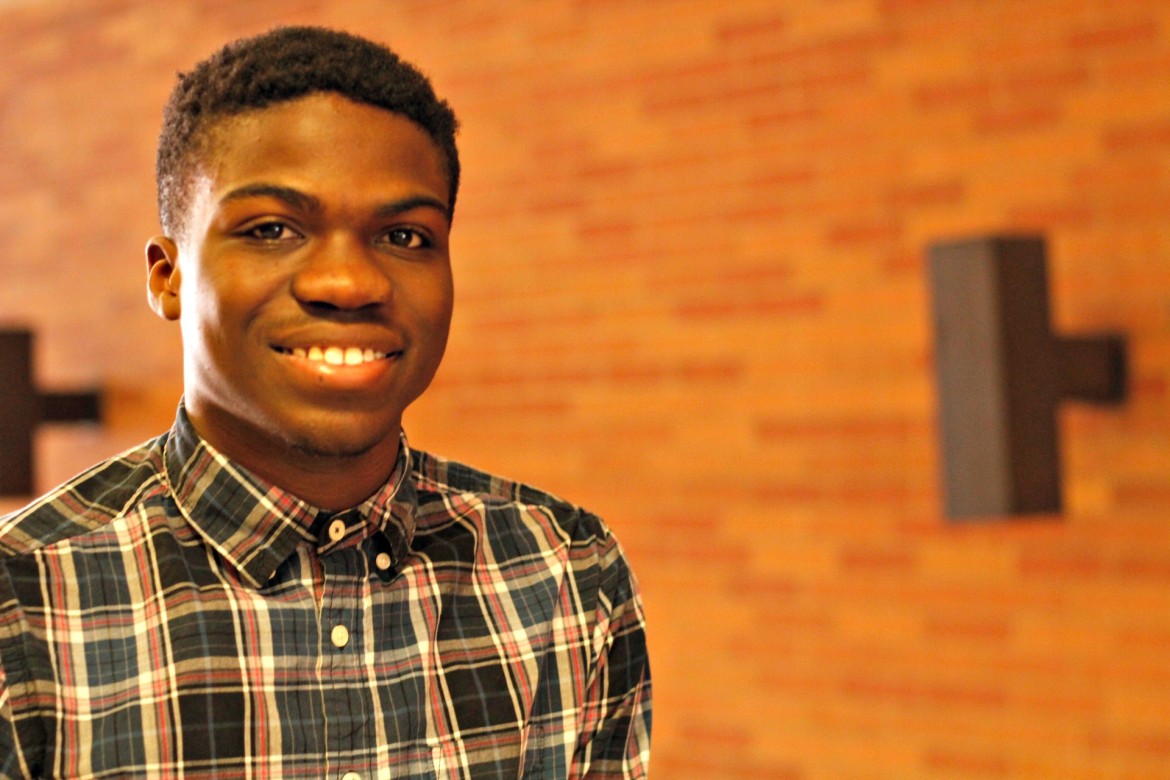 Kenneth Adusei is a standout student at South High — and for that he credits him mom.

“She said that the grades were unacceptable. The next day after school, she placed a chapter book in front of me and made me read it from beginning to end. At a very young age, I was taught to read chapter books and write summaries. It helped me a lot. It helped me adjust in school when I needed it most and I continued the reading through middle school. My mother didn’t gradually ease me into it.

“She has always told me that I can do it, and I am glad she did.”

That was just the start for Adusei, who was selected to be the only high school student speaker Tuesday, April 5, at Mass Insight Education’s Partners in Excellence Awards at Seaport Hotel in Boston.

Every day over the course of his academic career, a book and book summary were expected as part of his newly implemented at-home reading program. Fiction was the household genre of choice, allowing Adusei to fully exercise his ability to infer and increase his levels of empathy.

Coming from a family in search of an improved quality of life, Adusei has seemingly taken advantage of the opportunities for educational advancement presented to him through the sacrifices of his family, near and far.

While living in the city with his mother, two younger brothers — including Kevin, 16, who also attends South High — and older sister, Adusei remains separated from his father, who continues to live in Ghana. “My father is a huge supporter of my achievements. He continues to give me advice and always tells me I’m doing a great job,” said Adusei, who maintains an open line of communication with his father, despite the distance.

“It took me awhile to become adjusted. I was adjusting to my new environment and my mother always told me that was why I struggled. She has always believed in reading and the positive impact it has on someone. She believes it makes you smarter and helps you in life.

“In Ghana, my mom was working towards becoming a teacher, so she has that aspect of teaching,” said Adusei, who completed a research internship over the summer at UMass Medical School working with Patrick Emery, Ph.D, to investigate fundamental problems in neurobiology in an effort to better understand brain development and function.

“I now have a heavy interest in science and am torn between quantum physics and molecular biology because of my exposure through my AP classes, and I wouldn’t have that opportunity if it wasn’t for my mom starting me off with good reading comprehension skills.”

With a full schedule of four Advanced Placement classes (AP Physics 2, AP Computer Science, AP Calculus, and AP English Literature), Adusei is the kind of student who tends to be noticed. 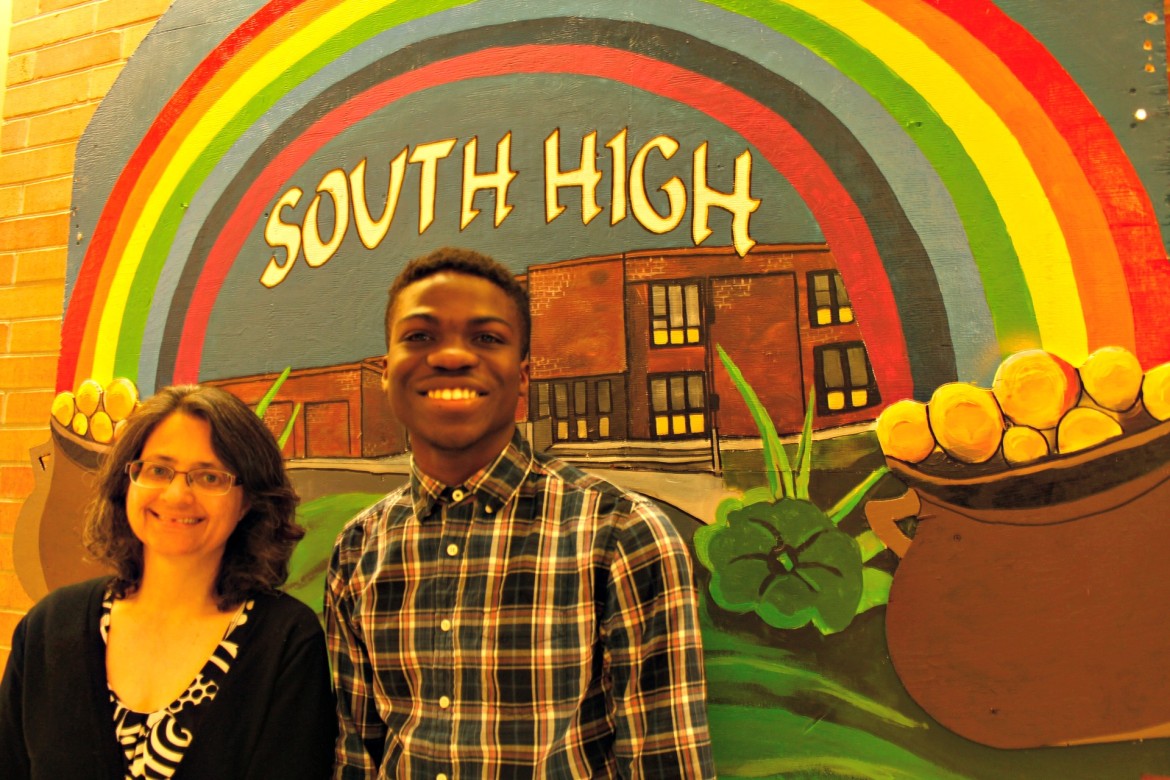 South High teacher Tara Vaidya will be honored at a statewide ceremony for her work with AP students like Kenneth Adusei.

“You always hear about students from other teachers that stand out. Teachers usually notify other teachers about who is entering their classrooms, from previous classes, and Kenneth was that kind of student,” said Tara Vaidya, Adusei’s AP Physics teacher two years in a row.

“Kenneth was in my AP Physics 1 class and he struggled. He came to me and told me he needed help and we spoke about different methods of finding the answers to problems, and he really excelled with extra studying at home and through our conversations.

“He would always get to the same answer as me, but his way of getting there was a bit clouded, and I tried helping him through his thought process,” Vaidya said. “He is a bright kid who has taken advantage of the AP programs at South High.”

The AP programs at South High are not a new concept, but the involvement of Mass Insight Education appears to have made an impact. The national education nonprofit is “dedicated to improving college readiness” by forming “performance-based” partnerships with eligible schools and students.

There were 406 enrollments in AP classes this year compared to 137 in 2009 when South began working with Mass Insight, according to the nonprofit, and the number of AP exam qualifying scores rose from 68 to 135 in that time. [Editor’s note: Though the raw numbers have grown, the rate of qualifying has actually declined as enrollment increases.]

Vaidya, in fact, is one of the 54 winners of the Mass Insight Education Partner in Excellence Awards. A graduate of Harvard University with a master’s in education, Vaidya has been a science teacher at South High for 10 years and has been able to fully see the impact of the AP classes in her students and their readiness for college. 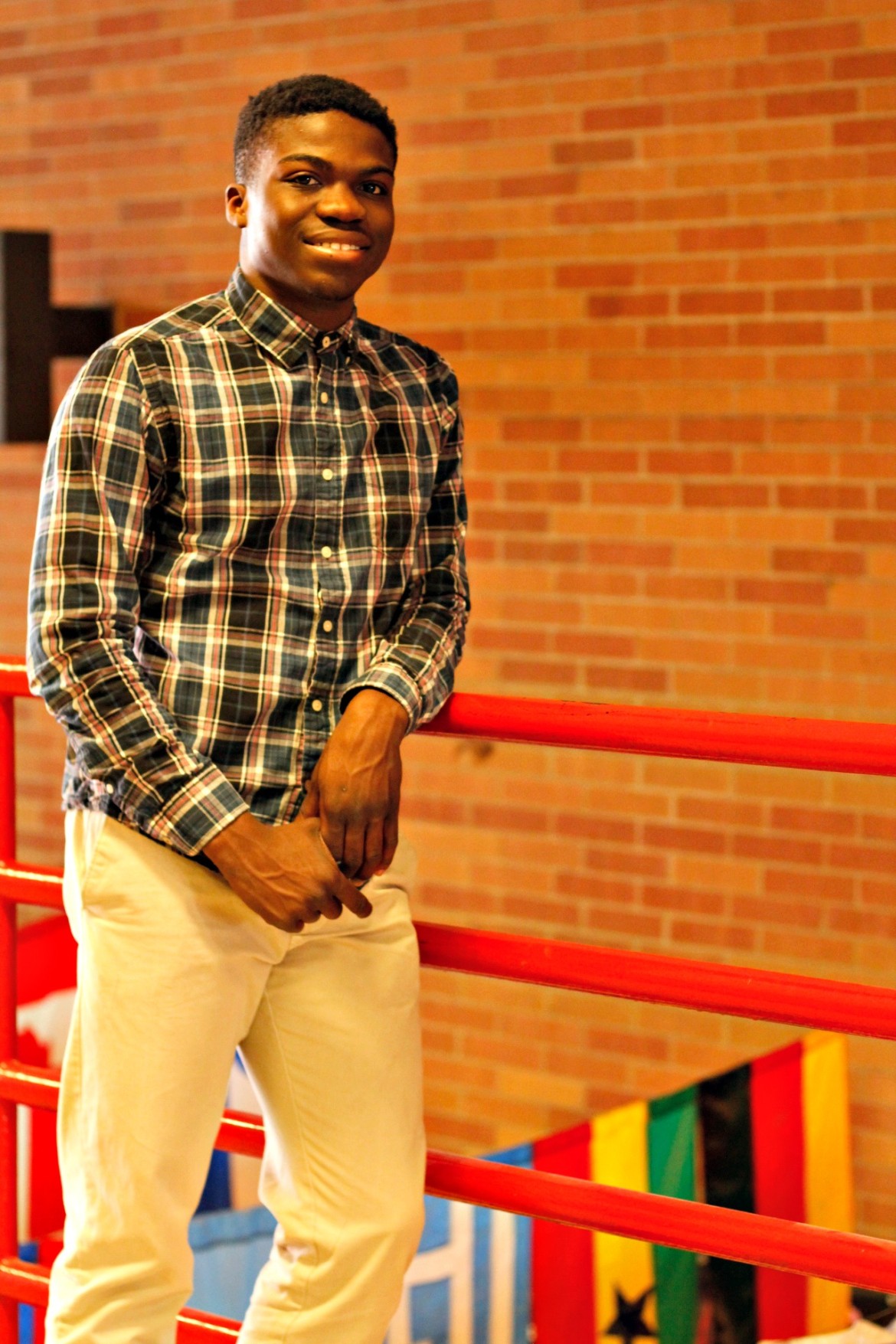 “I have benefited greatly from my AP classes and not just through my academics but also through real-world implementation,” Adusei said. “AP has allowed me to learn new things, and it has been about exploring different aspects of the learning experience. I always find myself trying to learn more than what the AP classes teach and I go deeper into the subject.

“I am now finding that I am highly interested in science research. These AP classes are more than just tests and lectures; it’s about using what I know outside the classroom.”

Indeed, Adusei has benefited greatly from those classes: Yale, Harvard and MIT — those are among the universities to which he’s been accepted. And although the decision will be difficult, Adusei understands many students are not in such a position. He said is grateful to have this enormous decision to make.

Before that, though, a speech.

“Not many students get the chance to tell an audience how AP classes affects students,” said Adusei, who will also play tuba with the South High band during the ceremony.

Seems like Mass Insight found the right man for the job.

This article was originally published in the April 3, 2016 edition of the Sun.