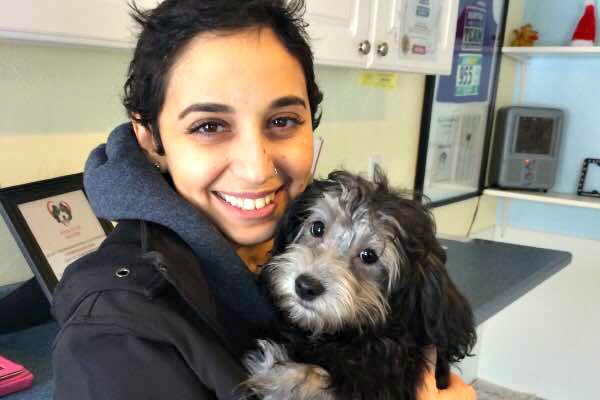 Jully, with her dog Trixie LuLu, a Havanese

She has her real estate broker’s license, a solid job, and is known as a prolific advocate and fundraiser for agencies who serve families dealing with chronically debilitating maladies. She has a long-time girlfriend and lives in a relatively peaceful and leafy corner of the city.

An award-winning volunteer and community leader with a dog named Trixie LuLu, indeed, she would seem the picture of serenity.

Except, creeping up on her 30th birthday, Jully still lives with her parents, is relegated to the first floor and needs help to walk. Oh, and she missed last summer.

Like most stories, you have to start at the beginning.

Amal and Tony Khattar immigrated to Worcester from Lebanon Feb. 1, 1987, with their eight-year-old son, Anthony, and four-year-old daughter, Mirella.

Amal and Tony raised their three children on Providence Street, sending each of them to Union Hill Elementary, Worcester East Middle School and North High School.

At the age of 14, Jully was diagnosed with the chronic, autoimmune disease lupus.

Jully, 28, has spent only one full calendar year out of the hospital, returning frequently because of complications from systemic lupus erythematosus [SLE], the most common form of lupus that affects a person’s lungs, kidneys, heart and brain.

She has been in and out of hospitals across the past 14 years for minor blood clots in internal organs, multiple aneurysms, and the removal of her gallbladder and appendix.

“It’s been really hard for us knowing that she has to suffer the way she does. But God only gives you enough that you can handle, and God surely knows that she can handle this,” Jully’s sister, Mirella [Khattar] Sawyer said.

Last April Jully went to the hospital for what she thought was a burst ovarian cyst, a pain with which she presumed she was familiar.

“I was having bad back pains and chest pains,” she said. “They ended up doing an MRI on me and found out that it wasn’t an ovarian cyst that was bleeding.

“It was, my aorta was leaking.”

Upon discovery of the hole in her aorta [known as an aortic dissection], doctors performed an emergency surgery.

“It all happened so fast. I didn’t really have time to think. They told me I was going to have an emergency surgery because my aorta was leaking and we needed to do the surgery that night,” Jully said.

She had only minutes to call her family and her girlfriend, Angie Le, before being wheeled away to surgery. Doctors told Amal and Tony that their daughter had but a 1 percent chance of survival.

“The doctors told my parents that my heart was very sick. They told them to be prepared in case I didn’t come out of it,” Jully said.

“I looked to God. I stayed hopeful, and here I am. Still kicking.”

From the night of that emergency surgery, April 30, Jully didn’t wake up for another three weeks. She spent 44 days in intensive care and was finally released from the hospital at the end of July.

“It’s weird looking back at your life and there’s a whole season missing. I missed the whole summer.” 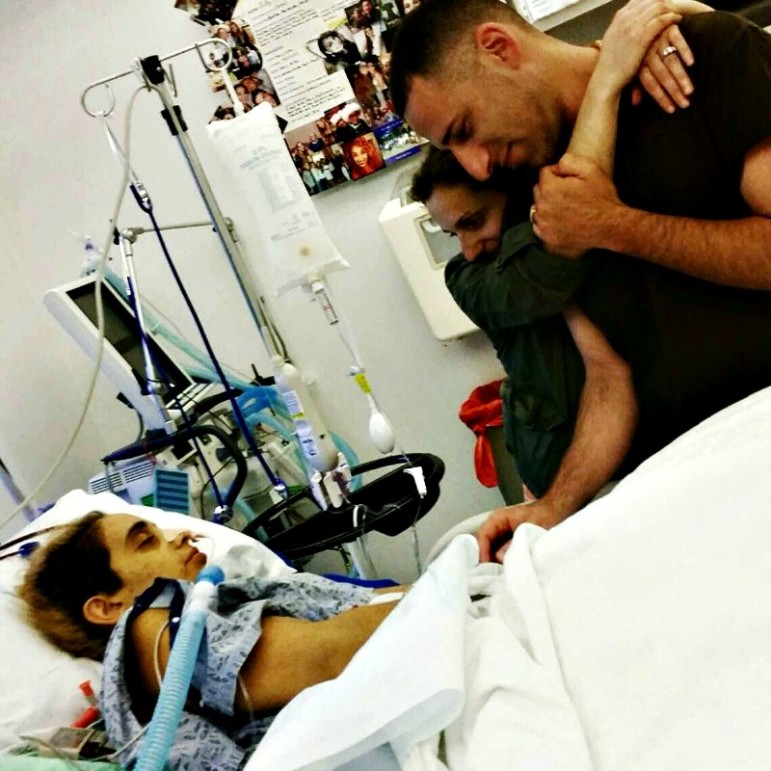 Siblings Mirella and Anthony, right, stand by Jully’s side as she recovers during her 90-day hospital stay last summer.

“It was the worst time of our lives,” her sister recalled. “It was a roller coaster every single day. Even talking about it gives me the chills. We didn’t know if she was going to make it through. The news would change all day long — good news, bad news — and we would hold on to any little bit of good news they would give us.”

Jully was left with multiple scars across her chest and abdomen. She couldn’t get around without a wheelchair and walker. She’s since been fitted with leg braces and uses a cane.

Wheelchair-bound during the first few months following her release from the hospital, she still did not sit idly by feeling sorry for herself.

Jully spent the rest of this past summer raising money for the Lupus Foundation of New England Annual Lupus Walk on the Charles. In less than two months, Khattar and her friends and family raised more than $5,000.

Khattar alone raised $3,300 and is listed as the top fundraiser of last year’s event, which raised more than $38,000.

Tina Cicero, a friend of Jully’s since their freshman year at North, said, “She was in her wheelchair and she still managed to do the Walk and raise so much money for them. She’s so selfless.”

According to Beverly Goodell, executive director of Lupus Foundation of New England, Jully has been a supporter of the foundation for more than six years and raised about $22,000.

“Jully has been a wonderful fundraiser for the foundation for several years even while battling Lupus and at times when it’s been extremely challenging physically for her due to her disease,” Goodell said. “And she is still one of our top fundraisers.”

In 2013, with the help of the foundation, Jully started a lupus support group for people in Worcester County.

“We talked about issues affecting us. My job wasn’t to lead the group, it was more to facilitate a discussion. We would all share stories and talk. It was a real support group,” Jully said.

The group, usually between about seven and 10, would meet once a month at Nu Cafe on Chandler Street. 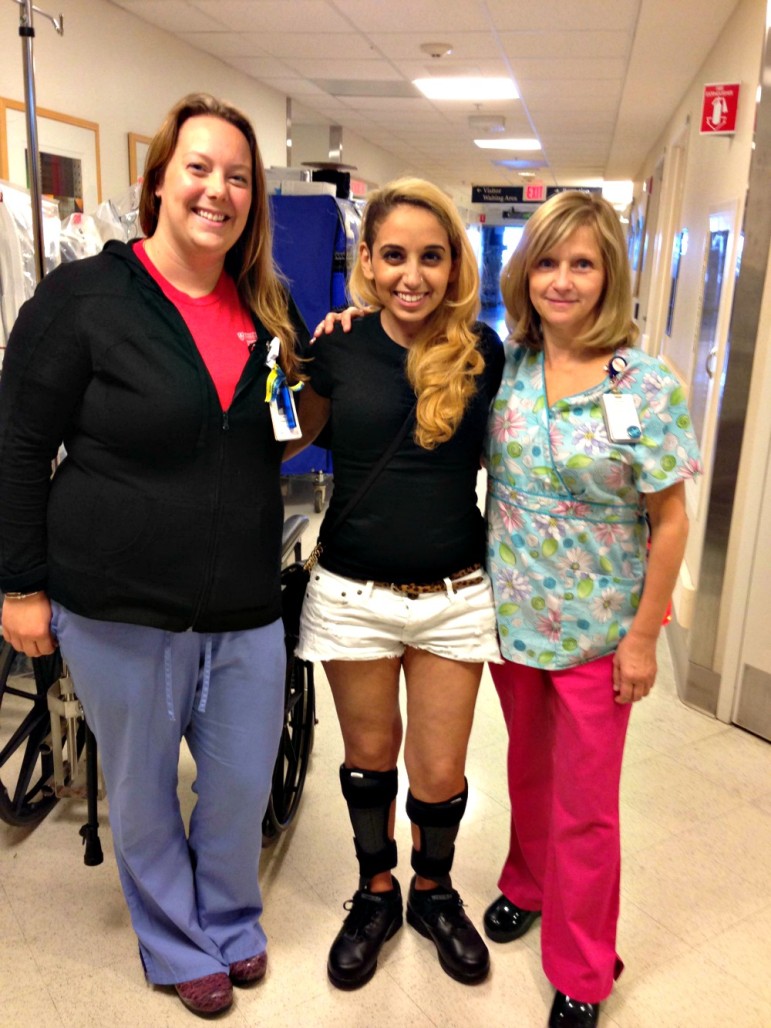 Until Jully’s three months spent at Mass. General and several ensuing doctor’s visits put a halt to the group meetings. She hopes to start up the group again in some capacity sooner rather than later.

“She’s been instrumental in our support groups and increasing the awareness of lupus, especially in the Worcester County area,” Goodell said.

The foundation recognized Jully’s fundraising and support group efforts in October at the Rhode Island Runway for a Cure event.

She was presented with the 2015 Summa Award, given to a volunteer who is an inspiration to many and has a commitment to their life in the lupus community.

“The Lupus Foundation is grateful for people like her,” Goodell said. “She gives hope to people that have been given [none]. Sometimes the road that you have to walk when you have lupus is so daunting. Jully still walks the walk with a positive attitude given her own challenges.

“At one point they gave her a 1 percent chance of survival. Even after that, she still has a smile on her face and a positive outlook on life, which is amazing. She has amazing strength and courage, and more importantly an amazing heart to face what she has to face day in and day out.”

When she’s not fundraising, or seeking hospital care, Jully works as an administrative assistant for her brother’s company, Khattar Realty on Plantation Street in Worcester.

Jully has her real estate license, but is unable to be active until she can walk without her leg braces and cane again. She had to move out of a third floor apartment with Le, and move into the first floor of her parents’ home, which is now on Pakachoag Hill.

“This is the first time ever since being sick that I haven’t been able to snap right back into work. A lot of my strength comes from having an awesome support system of family and friends,” Jully said.

Her perseverance and hard work are not lost on family and friends.

“She’s always positive. She’s always smiling, and you would never even know that she’s in pain most of the time. She doesn’t let anything get in her way. Any obstacles, she overcomes them. She’s amazing,” Cicero said.

“She is so positive. She doesn’t let Lupus slow her down in any way,” Sawyer, her sister, said. “She does everything and anything that she wants to do. She never feels sorry for herself. She doesn’t complain.

“People are drawn to her because of her positive energy. 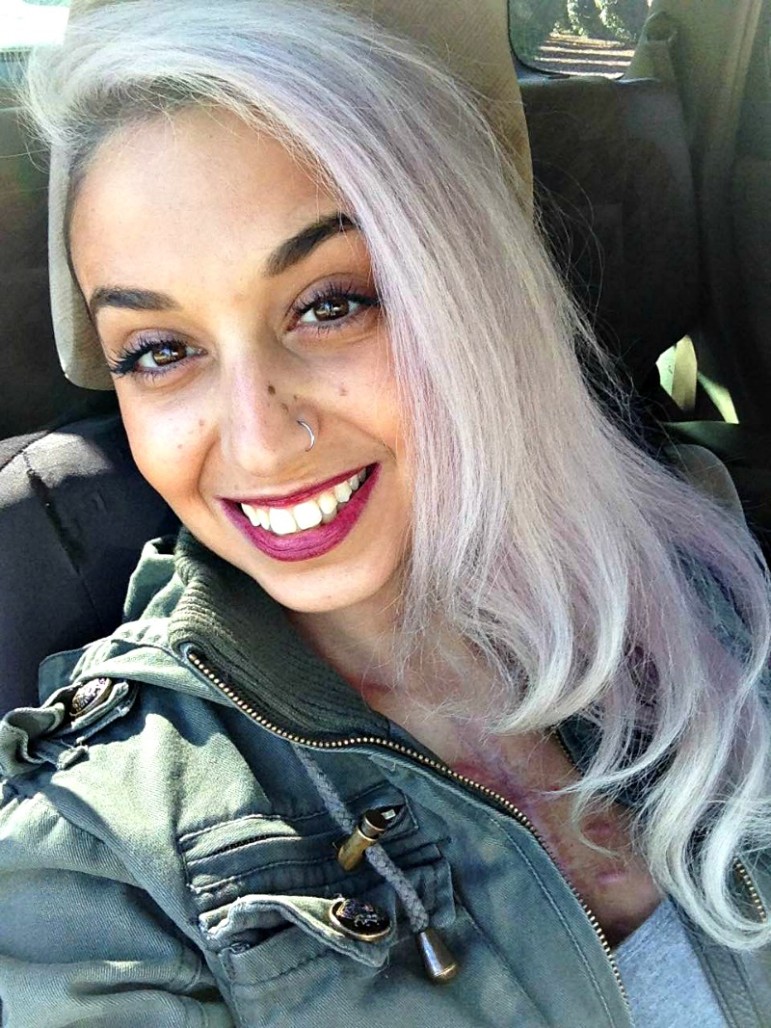 “She’s a role model with the way she’s lived her life. People with all types of illnesses, not just lupus, have asked her ‘How do you do what you do?’ She somehow manages to be this amazing person.”

How does Jully stay so positive; what would she tell a 14-year-old girl newly diagnosed with lupus? “It’s not a death sentence,” Jully said. “You have to keep pushing and keep moving forward.

“My story isn’t any different and my life isn’t any harder than anyone else’s. We all have a set of cards. You just have to play the hand you’re given.”

This article was originally published in the Feb. 17, 2016 edition of the Sun.