A young college student has been found brutally murdered inside her apartment.

And that’s where the fun begins.

At Escape Games Worcester, a team of six individuals will get locked in the student’s bedroom and will have one hour to solve a murder mystery. 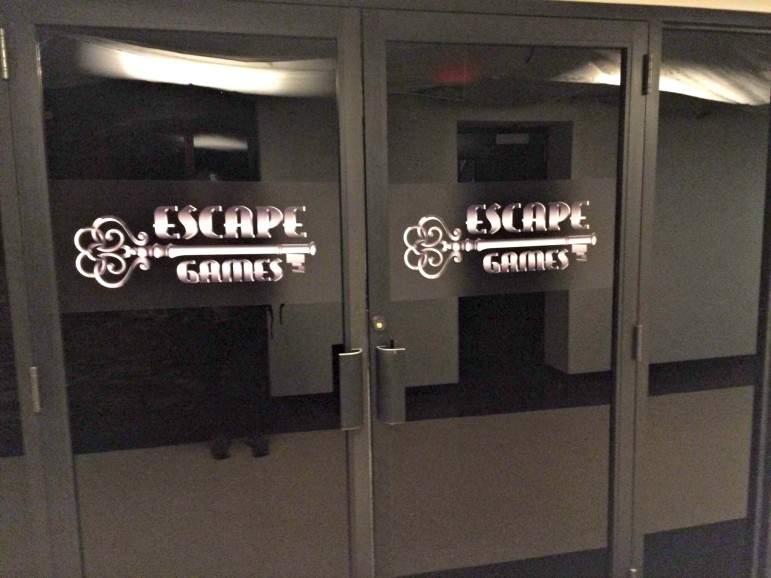 Escape Games on Grove Street invites you to, well, escape. It features different rooms designed to lock in its players until they think their way out.

Upon entering the room, there are no visible clues except for the murder scene. It’s up to the team to work the crime scene, gather clues, and solve what happened in order to escape the room.

“During that hour, the team looks around the room to find clues, solve puzzles and riddles and try to escape the room before the hour is up,” Escape Games Worcester owner Jason Eastty said.

According to Eastty, a Worcester resident, the group that’s the most organized will have the most success and the best chance of escaping the room.

“Be ready to go in the room and look at everything. Anything could be a clue. You just need to be prepared to think,” Eastty said.

Escape Games requires its participants to work together and use their problem-solving skills in order to solve a mystery, crime or puzzle, and escape the room within an hour.

Gina Spreadbury, a teacher from Worcester who tried Escape Games for the first time with her husband, Chris, on Thursday night, said, “It’s a race against the clock. You have no idea what you’re looking for when you go in the room. When you only have an hour, it can be nerve-wracking.”

“We thought we were doing well, but we weren’t even close to escaping the room,” Chris Spreadbury, a national account manager with Saint-Gobain, said. “It was difficult but intense and a lot of fun. We can’t wait to come back.”

According to Eastty, since its opening Jan. 8 on Grove Street, Escape Games has reserved nearly 1,000 spots in the two rooms it’s currently offering.

“In Worcester, it’s a great market for it because there’s so many colleges and there’s so many people living in the Central Mass. area. It’s been phenomenal. The response has been amazing,” Eastty said.

“I think it was great. Super original. I guess there are escape rooms all over the country, but I hadn’t ever heard of them until now,” Christopher Riley of Worcester said. 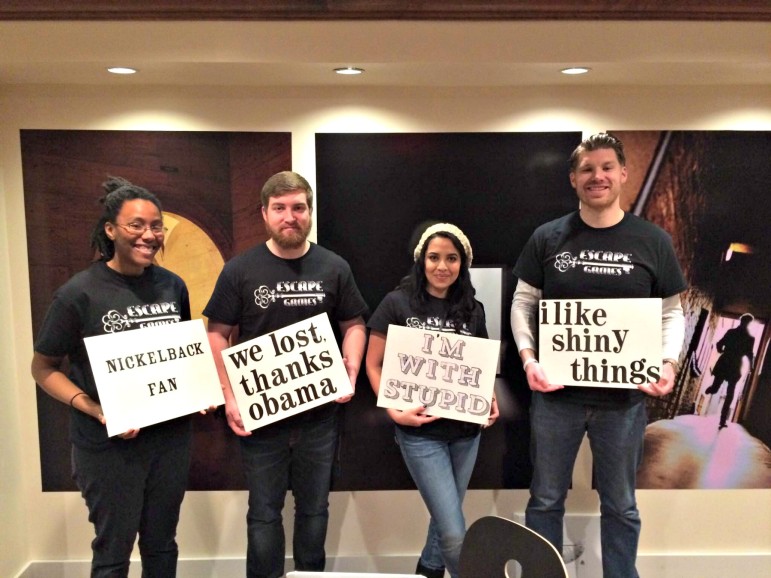 Riley, like the Spreadburys, also did the Crime Scene room. “It was fun and a fresh idea for Worcester. It makes you think, and challenges you. I’m still annoyed that we couldn’t figure it out,” he said.

Escape Games is open Thursday to Sunday. It offers five one-hour time slots for up to eight people starting at 4 p.m. The last room opens at 10:15. The cost for reserving a spot in a room is $25 per person.

The games at Escape Games Worcester are suitable for children ages 5 and up, but groups are encouraged to have the majority of the participants ages 13 and older.

According to Game Master Kyle Kirouac, over the first few weeks Escape Games Worcester has been open, there have only been a handful of individual slots that haven’t been reserved.

“It’s been almost fully booked. There hasn’t once been completely empty rooms. There’s been one spot here or one spot there that haven’t had a full six or eight people,” Kirouac said.

Aside from the Crime Scene room, where you have to solve the murder of the college student, Escape Games offers The Museum Room, where participants have to use cryptology and creativity to reveal what mysteries a secret organization is keeping from the outside world. In addition, there are plans for three more rooms. 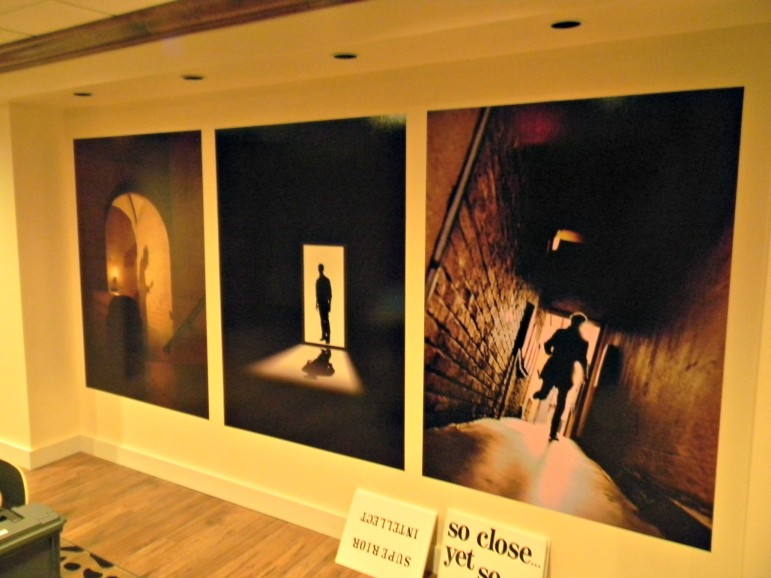 Escape the room games became popular in Asia a decade ago but are now gaining traction in U.S. pop culture.

No one has yet solved The Museum Room, Eastty said. And only three groups have escaped the Crime Scene room.

“We can’t wait to come back and try the Museum. The crime scene was so much fun,” Gina Spreadbury said. “We’ll probably be back next weekend.”

Escape Games are becoming a very popular form of family entertainment in Massachusetts with Live Action Escapes in Auburn and several options east of Worcester, including Trapology Boston, Amaze Escape in Arlington, Room Escape Adventures in Somerville and Escape the Room Boston.

Last March, Eastty, his wife, Dr. Chelsea Perry, and a group of friends tried Escape the Room Boston and were instantly hooked. According to Eastty, they had so much fun “even in a losing effort.” In fact, Eastty and Perry are going back this week to try Escape the Room Boston’s newest addition, “The Dig.”

After their experience in Boston last year, Eastty and Perry, who own Elite Dental Care in Westborough, wanted to try more Escape Games. To do that, they decided to shut down their dental office for a weekend to take a trip to New York to try games there.

“To cancel a weekend is a big deal for us. We had to cancel patients, book a hotel room and travel to NYC. And then we said to ourselves, if we’re really going to travel this far for it, why don’t we just start one ourselves?” Eastty said.

It didn’t take Eastty and Perry long to start one in Worcester. Within days of returning from New York, the couple filed a certification of organization on March 31 with the state of Massachusetts under Escape Games LLC.

It took a long time finding a space, but Eastty said their space in the basement floor of the Northworks building is laid out perfectly for the games. 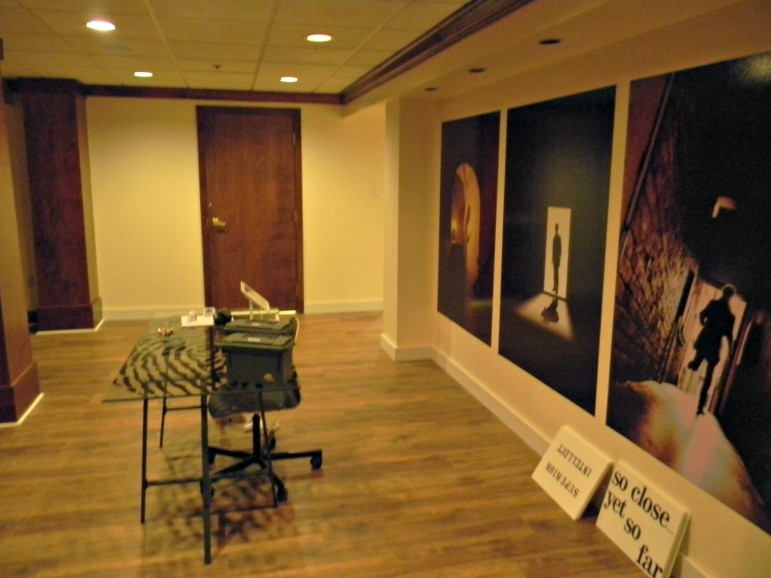 Can you make your way out of this room? It won’t be as easy as opening the door.

When customers arrive at Escape Games Worcester, they’re greeted by a single desk under dim lighting. Three images behind the desk that show a man in a doorway, someone running down an alley, and a detective with a magnifying glass contribute to the room’s ominous feeling.

Game players are led down a long hallway lined with doors that you can’t help but wonder what lies behind them.

“With the long hallway and all these rooms coming off the hallway, it really is the perfect place,” Eastty said.

They began building rooms in the 3,000-square-foot space in October and were open for the start of the new year.

“What we do is start with a theme of a room that we think would be cool, like Crime Scene, which everyone seems to like, and we build it from there,” Eastty said. “We ask ourselves ‘OK, what is the crime? What is the room going to look like? How will we decorate it?’ And once that’s done, we ask ‘OK, now how can we make a game out of this?’ ” 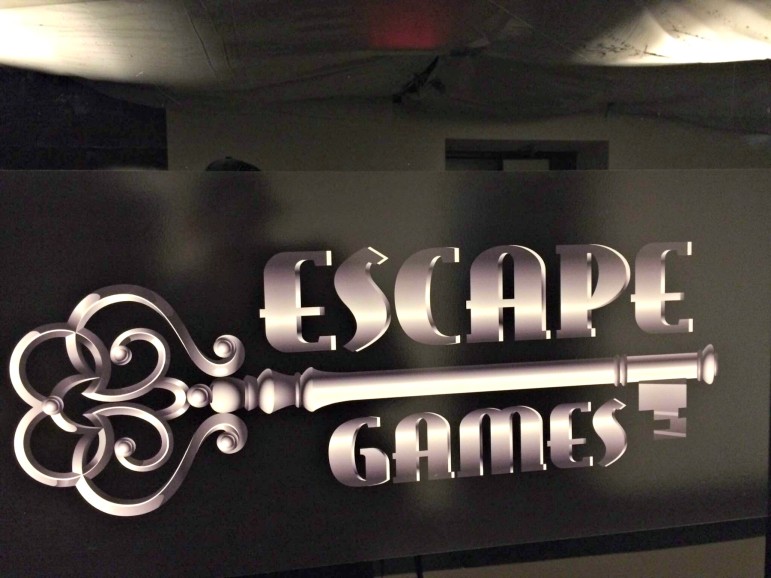 Our reporter/photographer could not escape his reflection. (Can you unlock this mystery?)

Riley, who’s looking forward to trying all the rooms that Escape Games has to offer, said, “All around Worcester there are bars, restaurants, billiards, gyms and clubs. But this was a nice break from the norm.”

Coming soon to Escape Games Worcester will be the Conspiracy Room, where participants will role play as rookie detectives from 1960s Los Angeles. A famous celebrity has died and the team members need to determine whether it was an accidental overdose or if there’s a larger conspiracy at play.

This article was originally published in the Jan. 24, 2016 edition of the Sun.