You have seen the movie before: the 30-year old, not married but in a relationship.

He has a stable job, as a teacher. One that gives him rigidity through part of the day, the veneer of familiarity each time you encounter him, and flexibility for additional work on the side. 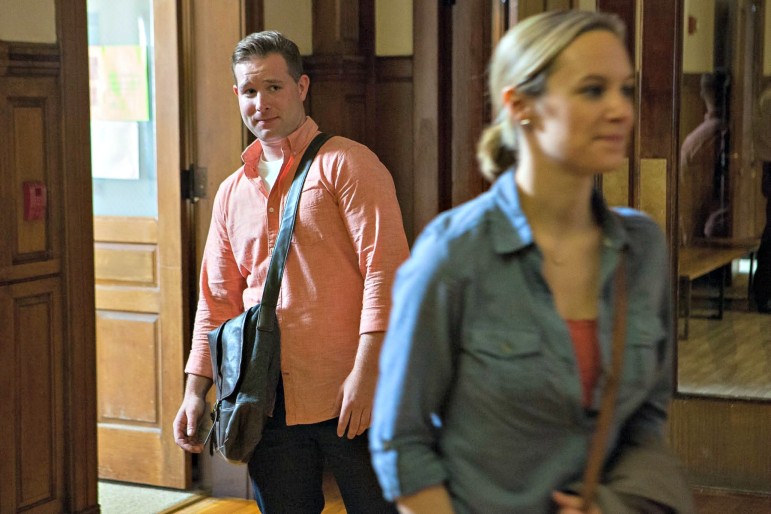 The movie begins at 2 p.m. as school lets out, him finishing one of 40 experiments he co-designed, then traveling home, sleeping for a handful of hours, before changing and leaving the house for some side work.

You know what happens next: he changes, leaves the house, and the scene quickly cuts to him violently assaulting a woman. Of course in Worcester, these stories unfold not just on your basic cable-adapted television set.

Kevin G. Cox, a resident of the Burncoat neighborhood, is an actor whose latest movie “The Wrong Car” recently premiered on Lifetime [and airs again at 7 p.m., Sunday, Feb. 7].

It’s an Uber-gone-wrong style thriller, in which Cox figures prominently, playing what any Lifetime-viewer would recognize as the “come on, that’s the guy” character, whose background is more nuanced than your popcorn-throwing-at-screen would indicate.

“The Wrong Car” marks the sixth professional acting role for Cox, beginning with the 2010 film “Boyband,” anc continuing with other titles “Sexting in Suburbia,” “Last Hours in Suburbia,” “A Deadly Obsession,” and “The March Sisters at Christmas.”

“I’m just a guy who can do my job and do some fun on the side,” Cox said, referring to his day job as a physics teacher at Burncoat High School, where he previously attended high school.

In a sea of roughly 1,400 students Cox began his high school career as a track runner and football player with his only previous exposure to performance primarily being an annual Christmas production for family with his two younger sisters that continues to this day.

The bridge between jock and drama geek finally precipitated during freshman year. 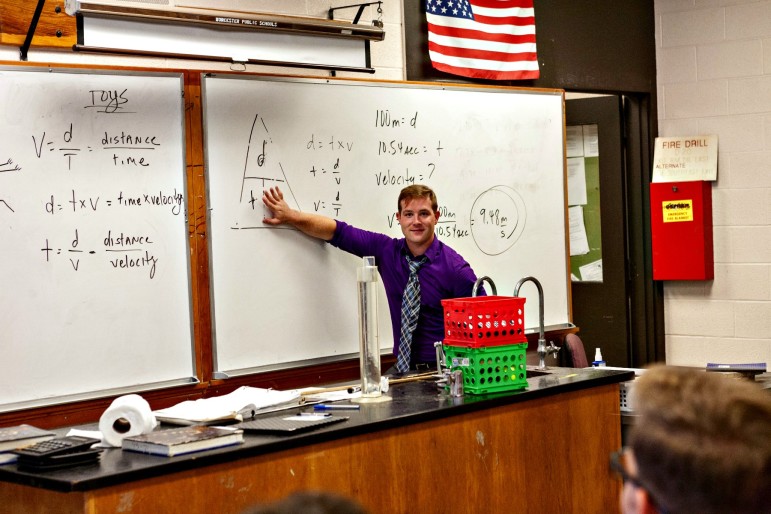 It was a Burncoat teacher, appropriately enough, who inspired Kevin Cox to pursue his artistic talents, such as acting.

A combination of good pressure from his immediate social circle — “there was a group that did the same thing” — and the prime announcement of “Guys and Dolls,” led Cox to his first professional acting audition. “I was a little nervous” he recalls, noting that encouragement from his father to audition led to a right-place-right-time intersection in his high school career.

“Kevin came in to the vocal portion of the audition and really sold the song ‘Doo Wah Diddy’ to myself and my colleague,” recalls Burncoat music teacher Deborah Cole, “we both ended the audition singing along with him. It was one of those auditions that we will always remember — for the right reasons.”

From a role as Benny Southstreet in that performance, Cox’s musical education continued through the remainder of high school, where he was regularly cast as leads in Burncoat’s musical productions, including Jesus in “Jesus Christ: Superstar,” and Ren McCormick in “Footloose.” There he was later encouraged by now-New York Philharmonic player Max Zeugner to join the school orchestra, where Cox’s path again intersected Cole’s.

“She had a vision,” notes Cox, adding “and also she was lacking French horns.” Yet like so many, the vision was not one-sided.

The first side was on a personal level. His parents having separated when Cox was 10, it was the high schooler who brought his then-music teacher and father together, despite the two adults working as colleagues at Burncoat.

“I didn’t pick her out; he picked her out for me saying, ‘she is the coolest person I ever met, and you have to meet her,’” recalls Kevin’s father, Kevin J. Cox, also a physics teacher at Burncoat. The decision by the younger proved efficacious, as the trio remain colleagues at school and family off-the-clock.

Second, the introduction to formal musical training opened the door to the younger Cox’s later academic and professional endeavors. It was over the course of French horn lessons that Cole discovered Cox’s “perfect pitch.” Through theater classes and immersion into the Music Magnet program at Burncoat, Cox’s oeuvre of musical knowledge grew.

“His affinity for the arts was obvious,” Cole said.

In the fall of 2003 this affinity for both family and music led Cox to his father’s alma mater, Bates College, a small liberal arts college off Interstate 95 in Lewiston, Maine, pursuing an undergraduate degree in music composition with a minor in philosophy.

It was here, in between the stacks of manuscript paper, and the writings of Nietzsche, where Cox spent his time more fully engaged with musical pursuits. At Bates, where a cappella was “the thing,” Cox joined the Bates College Deansmen, allowing him to not only get his feet wet in performing, but eventually leading to a performance with the Deansmen at the Bush Compound in Kennebunkport for former President George H.W. and former First Lady Barbara Bush; the latter of whom, Cox notes, was just as vivacious as elsewhere reported.

But moving from Worcester to small town New England was not the smoothest of transitions.

Recalling his classmates, Cox notes, “they all had summer houses in other countries; I was the kid from Worcester.” Despite these socioeconomic differences, Cox found all to be personable, with ultimately the main challenge being on crutches for the first full year after a minor accident.

It was among these peers that Cox began constructing his own pathway into the musical arts, creating a ’90s cover band, The Nancies — its name arising from a critique over the prowess of the participants. The band still meets regularly, about once a year in Vermont for a week, while iterations of it have perpetuated on the campus of Bates over the year.

The discordance between class, and aloof music may in fact be what allowed Cox to grow for his career as a teacher, noting in passing “I enjoy awkwardness; I feed off of it.”

By the time he graduated from Bates in 2007, Cox had saved enough money through a variety of jobs — including a stint working at Concord’s Hawthorne Inn — to purchase a house, then owned by a relative.

He had a job as a music teacher, but quickly pivoted into a long-term substitute physics position opening at Burncoat. 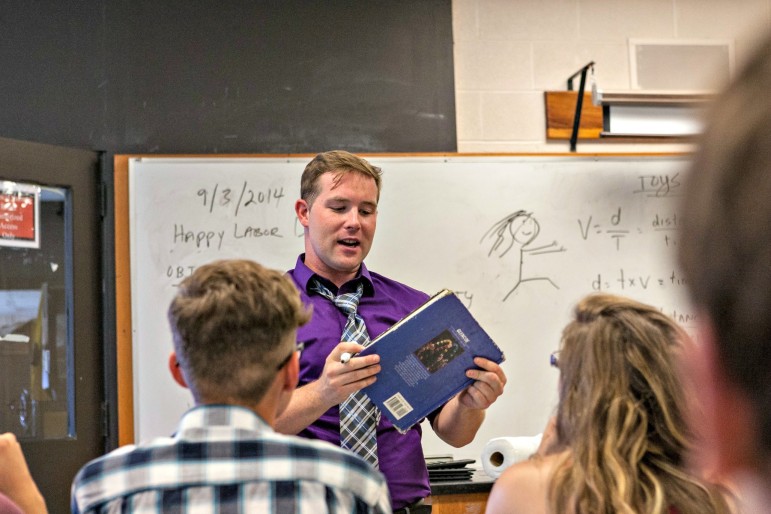 Kevin G. Cox followed in his father’s footsteps as a physics teacher at Burncoat High.

Despite his dismissal of his own acumen for the position at the time  — noting that Burncoat “desperately needed a physics teacher” — Cox began pursuing classes at Worcester Polytechnic Institute, and then Worcester State University, affording one class per semester, until finally gaining his education major with a minor in Physics.

Yet over the course of his other pursuits, acting always featured prominently in his life.

It was an ad in 2007 that led him to his first major role, the indie comedy feature film “Boyband,” shot in Worcester in 2008. While Cox is attributed to the role of “Guy 2,” his work on the film is discretely more pronounced.

“Kevin sang the lead vocals on the demo recordings of all the songs for the film,” highlights Andrea Ajemian, a film and television producer who first met Cox while producing “Boyband,” “Then when our lead actors flew in we replaced the vocals with theirs. However, you still can hear Kevin’s voice in the boy band songs in the film when it’s really high notes.”

From “Boyband,” Cox continued gaining roles in a fashion he describes as “extra, extra, extra”. While minor on paper, these roles have been vehicles for Mr. Cox to gain further exposure, and create an identity in the area film industry.

John Stimpson, a Worcester-based writer, director and editor, met Cox on the set of his film “Sexting in Suburbia,” also shot in Worcester.

“He was just volunteering as an extra in that film, but he very quickly caught my attention because of his humor and infectious personality,” Stimpson recounts. This energy translated into an albeit unscripted, but more dynamic role, constructing a moment Stimpson relates to as the “unexpected gems that make filmmaking such a joy”.

Cox has regularly worked with Stimpson, who wrote and directed “The Wrong Car,” noting that “Kevin has wonderful raw ability as an actor…[and]  stands toe-to-toe with the best of the Hollywood actors I’ve brought to town…I feel so lucky because it’s like he is my secret weapon.”

Another Stimpson oft-collaborator, Ajemian, agrees, “Kevin has the talent and the drive, and he’s a good person.”

During the school year this primarily means work on the weekends, or shooting well into the night after a quick jaunt to bed after classes. During vacations, with a lighter schedule, he can more actively pursue his craft.

This accommodation is recognized by those with whom he works. “It’s a nice feeling,” Cox said, expressing his hope that he reciprocates the kindness others have showed him on set. “All of the professional actors try to get to know you, they feed off the idiosyncrasies,” he says, not necessarily recognizing he has expressed this same trait through the course of an ongoing interview.

So it becomes ultimately a question of where things stand, and not for lack of talent.

Both Stimpson and Ajemian believe Cox has potential, the former believing “if he bites the bullet and gives this crazy business a go by moving to Los Angeles or New York, I think he’s got a good chance of doing really well.” Ajemian said, succinctly, “he’ll go far.”

For Cox, it seems more simple. “In my heart, I love teaching,” he says, not with melancholy, but with resolve. “Every day, kids need to be believed in, and I believe in them.”

When you hear him speak of his students, there is little doubt this is true; each discussion of a general student archetype or facet of learning rings with the authentic distillation of someone who once graced his classroom.

“I come across kids who are like me; it’s a gentle reminder that I once was a kid,” Cox says, “and you’re allowed more than one chance in my class.”

And it is not to say that he does nothing on the side. Outside of professional acting, taking classes to that end and looking into voiceover work, Cox has also skydived, gained his black belt in Shaolin Kung Fu, assists his father’s stewardship of Burncoat High’s robotics Green Reaper team 1735, and developed over 40 physics experiments for the classroom with his father. 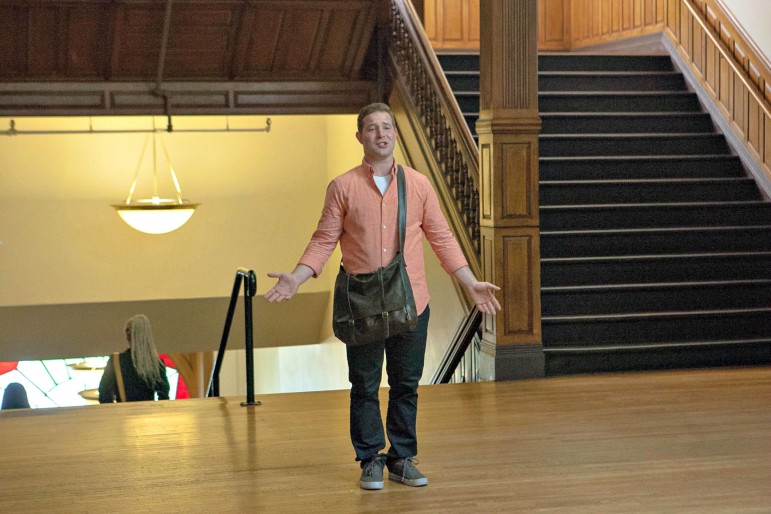 It is an odd thing watching a Lifetime movie.

The situation in which the audience finds itself being lead often requires suspension of disbelief. Each scene is a new pill, each pill taken down hoping that what emerges at the end — even if wildly unfathomable — is still authentic.

When one meets Kevin Cox, it is much like meeting this Lifetime character.

Unlike those beaten and bereaved at the end, his story is one of somewhat unbelievable success and variation, but an unwavering purity rooted in understanding and generosity, beginning first and still ruminating in Worcester.

Ultimately notes Cox, “I at least get to have five shows a day.”

This article was originally published in the Feb. 3, 2016 edition of the Sun.

Alex moved to the Worcester area in 2006 and is currently completing his bachelor's degree in international politics at King's College London. An avid coffee drinker, Alex can regularly be seen vibrating through Worcester coffee shops. He was recently nominated for Mr. Gay Worcester, which he declined. Alex was one of the first contributors to reach out expressing an interest to work with the Sun.