There is no dispute that Main South has seen better economic times.

But even when the gritty neighborhood was riding the crest of the city’s golden industrial age, there was little chance that passersby might be soothed by the sounds of classic chamber music wafting from the teeming tenement houses and the three-deckers that served as home to the working class.

Chamber music, after all, was for the snooty — the folks who lived on Salisbury Street.

Time, of course, can change things. 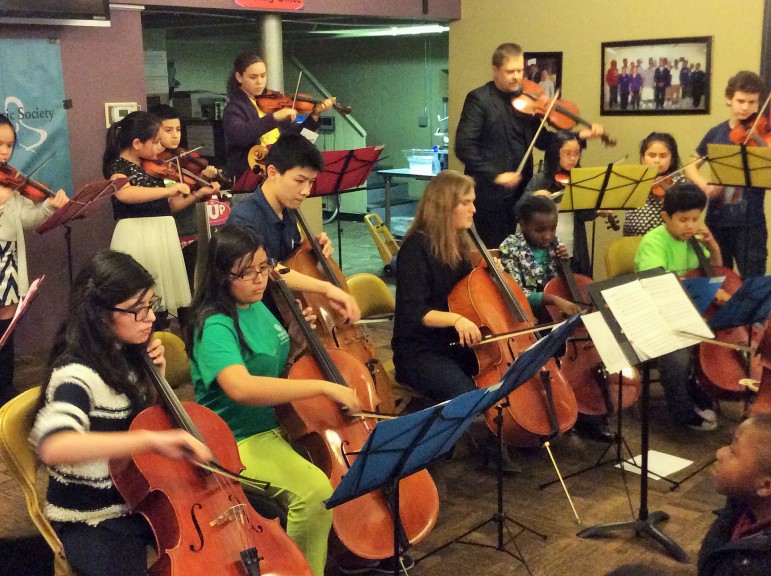 So, perhaps it shouldn’t come as a surprise that, over the past couple of years, chamber music has unexpectedly made a tiny footprint in the rough-and-tumble neighborhood, and, curiously, its ardent aficionados are a small group of kids.

Thanks to the Worcester Chamber Music Society, which is celebrating its 10th anniversary, Main South youngsters have had the opportunity the past four years to get their hands on some musical instruments. Under the tutelage of society members, they have received free music lessons at Woodland Academy. The programs, officials said, have helped the students gain a deep appreciation of the musical classics.

“This is one of the ways that we are reaching out to the community,” said Tracy Kraus, the group’s executive director.

The Neighborhood Strings program has been expanded this year to the Seven Hills Charter School downtown.

Last Friday, students new to the program, all 19 of them, received their gleaming musical instruments at a program held at the Straight Up Cafe on Main Street. To date, those kids had been learning basic musical concepts through songs and activities.

Friday’s event included performances by the students, who have been in the program for some time. But not to be left out of the fun and festivities, the newer students, using improvised instruments like plastic True Value buckets that served as drums, exhibited their own developing skills to admiring family and friends by taking part in rhythm and song exercises. 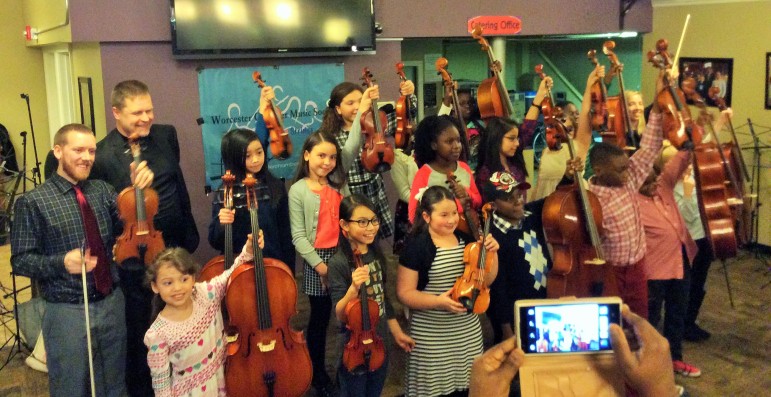 The 19 newest participants in the Neighborhood Strings program show off their instruments at the Instrument Giving Ceremony last Friday night at Straight Up Cafe.

Thirteen year-old Tabitha Criollo decided to take up the cello three years ago after learning about the program at Woodland.

Her friend, Melanie Aguilar, 14, a ninth-grader at Claremont School, also took up the cello.

“The cello produces such a lovely sound,” said the daughter of Delmi and Edgar Aguilar. “I just can’t get enough of it.”

The society has been bringing world-class chamber music to Central Massachusetts for 10 years.

The organization’s mission, members said, is to cultivate an appreciation of music through performances and various community events it sponsors.

Members feel it’s also important to get youth involved, especially those who might not have the means to afford instruments. The organization, officials said, strives to dispel the notion that chamber music is solely for the elite or the wealthy.

Neighborhood Strings is open to youth ages 6 to 15. The children can take violin, viola or cello classes. Students have the option of taking more than one class a week, which enables them to more firmly grasp musical concepts.

Last Friday night, 19 violins, violas and cellos were given to new students in the Neighborhood Strings program run by the Worcester Chamber Music Society.

There only cost involved is a $10 fee to loan an instrument for a year.

Ariana Falk, who is in charge of Neighborhood Strings, said the program is based on a similar one launched in Providence. She teaches the classes along with Kraus; Peter Sulski, artistic director; and Rohan Gregory, a society member and violinist.

Falk, who received a doctorate in musical arts from Boston University and a master of music and arts degree from Yale School of Music, estimated at least two-thirds of the students had no musical background before joining the program.

“There are no auditions,” said Falk, a Fulbright Scholar who studied in Germany.

For example, family members are invited to an event at 3 p.m. Sunday, Feb. 28, at Mechanics Hall. The society will perform Michael Gandolfi’s “Pinocchio’s Adventures in Funland.” Neighborhood Strings participants, including new students, will take part.

Falk said there is a chance that “home visits” will also be scheduled so parents can learn more intimately about the program and can pick up ways of helping their kids with music lessons.

About 40 children are now involved.

“The kids love the program so much that they are afraid of losing their instruments when they get too old to participate,” Falk said. “We’re working on a plan so they can keep them.”

Melanie, the ninth-grade cellist, proudly noted that she has been with the program since its inception. “I hope to play the cello forever,” she enthusiastically said.

Melanie said she was joyfully surprised on Christmas when her parents presented her with her own cello. 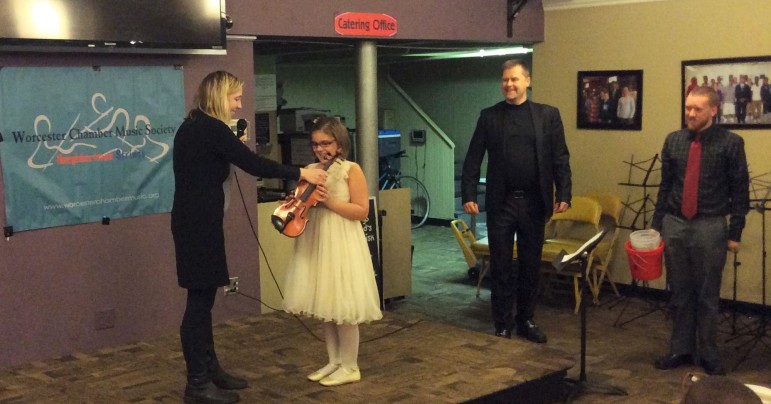 Each new participant in Neighborhood Strings takes an oath to care for their instruments and have fun playing music.

At Friday’s presentation, the new students individually took an oath to care for their instruments. Falk said that learning music was a difficult chore and that the students would have to spend some serious time studying.

“I like the violin because it can speak to you,” said the youngster, the son of Samuel and Rita Baafi. “Music is very emotional.”

Parents said they weren’t sure their children would ever play professionally at Symphony or Carnegie halls, but said that music would help them to round out their lives.

“Music is fundamental,” said Jermaine Elvin, whose daughter, Ariana, is one of the program’s new students.