Houses that fall into disrepair can drag down resale values in a neighborhood. This is as practical as it is intuitive.

A groundbreaking study from a recent Clark University student for the first time answered those questions. 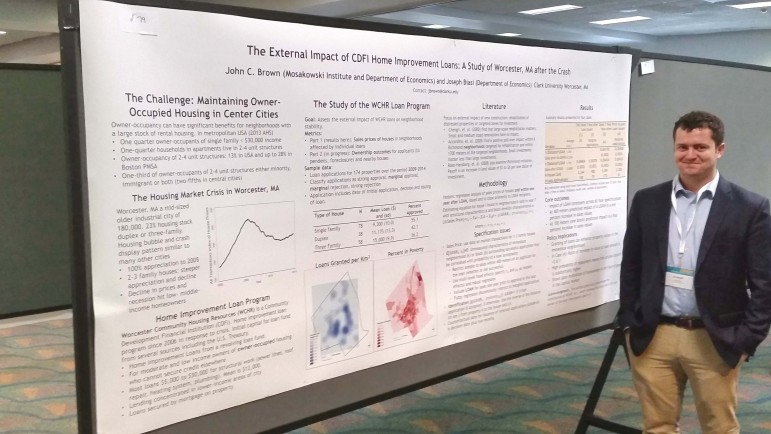 Biasi’s paper was so unique that it was presented at a recent conference of the Association for Public Policy Analysis & Management in Miami.

Biasi, who hails from Groton and graduated in May with a major in economics and minor in mathematics, said he always had an interest in housing. He applied to WCHR, a local nonprofit, twice, landing an internship on his second attempt.

“When I saw the [loan] program and started thinking about it, it’s a really great program because it does a lot of things where I had to eliminate assumptions I would have to make otherwise, like the money is going completely toward fixing the house,” Biasi said recently.

WCHR’s Community Loan Fund is available to homeowners in Worcester County with a total household income of no more than 120 percent of the median: $99,550 for a family of four.

The central question of his thesis was: Is there a positive relationship between sales prices and the granting of home improvement loans? Yes, Biasi found.

“A lot of these [housing] studies really focus on large developmental projects. If you put the mall in the middle of this neighborhood, what happens to the housing prices? Or if you put this massive apartment building, what happens to rents in the neighborhood?” Biasi said. “This is kind of looking at reverse of a foreclosure. A home is foreclosed on and falls into disrepair. If you don’t take of a home, obviously stuff starts to happen to it. This is kind of looking, What if we stop the home from falling into disrepair?”

He started by building a database of Worcester housing. Property by property, he pulled from the assessor’s database information on roughly 56,000 properties.

“If small home improvement loans do have a spillover effect to sales prices of nearby properties, it could be an effective tool for neighborhood revitalization. Instead of allowing neighborhoods to deteriorate, a system of proactive rehabilitation could keep costs low while supporting property valuations.” — Joe Biasi

In all, Biasi said, he collected 13 million data points.

“It was a lot,” he said “It was a tough, tough experiment, but that is really what enabled me to do this project was getting that data on top of the WCHR data. And that’s what made me really confident in the results.”

The WCHR data to which he refers is data about the home improvement loans granted and denied by the loan fund.

“The denied loan data is very confidential … tough to get,” Biasi said, quickly noting that in all his data he did not compile any personally identifying information that would have caused privacy concerns. Being able to compile denied loan data was “vital as research to understand how exactly similar are these people” who received loans versus those who did not.

It is the comparison of two similar groups, those who received loans and those who did not, that make his study unique. That type of comparison is called Difference in Difference Design.

“Essentially I’m looking [for] the difference between two groups of people who both needed this kind of investment, people who got the loan and people who didn’t get the loan,” he said. “And looking at what happens to neighborhood prices when people got the loan compared to those who didn’t.”

The four sets of tests yielded results ranging from 4 percent to 9 percent. While Biasi will say it’s difficult to put an exact figure on what the increase is, the data shows an increase.

“The main goal of the [loan fund] program is to help applicants who need financing to repair their home,” Biasi said. “But the effect of these loans was shown to spread out into the community.

“If small home improvement loans do have a spillover effect to sales prices of nearby properties, it could be an effective tool for neighborhood revitalization,” he added. “Instead of allowing neighborhoods to deteriorate, a system of proactive rehabilitation could keep costs low while supporting property valuations.”

What was really striking to an outsider is how little money is required to see this increase. The average amount of a loan in the study is $12,918, and the amount after which there were diminishing returns was a shade less than $17,000.

What struck Biasi the most was the efficiency of the loan program.

“I was kind of taken aback by how powerful this could really be,” he said. “The things that is surprisingly important is it’s a lending program. The beauty of a lending program, even if you don’t get everything back, is that some of it comes back and you can use it again. … This is really an efficient program compared to a grant program where you give the money and that’s it.

“So for people who are on the margin, and there are quite a few after the crisis, this is a great way to give them credit, to extend credit to someone who really absolutely needs it, in a way that’s efficient in that the money comes back,” Biasi said.

Biasi found a lot of interest when he presented the study in Miami last month. Biasi’s thesis professor, John C. Brown, said that with the conference’s focus on the golden age of data-driven public policy Biasi’s paper would make “a nice example.”

“People from the Federal Reserve, different colleges, different government associations, you know, people who are really experts in this come and ask me about this. It was great,” Biasi said. “It was great to hear from people who have been experts in the industry for so long, especially since relatively I’m pretty new to this.”

What sparked the interest was the distinct quality of the WCHR loan program and its focus on owner-occupied housing.

So, what are the ramifications of this study as it applies to Worcester?

You can’t make the case that bigger is better, either for the size of loans or who gets accepted. Changing size leads to diminishing returns. Changing lending requirements risks a higher rate of default that could jeopardize the Loan Fund entirely.

“There’s this interesting duality of lending and being a nonprofit,” Biasi said. “You have this incentive to do good and help people out. But on top of that, you need to make sure your credit standards are good because of that. … You’re hurting the people you’re trying to help if you don’t maintain credit standards.”

What is safe to say is that there would be a greater impact in Worcester if everyone who was eligible and needed the loan knew about the program.

“The people who get the loans know about the loans, so there could be so many applicants out there who don’t know about it,” Biasi said. “I think it improve the program’s effectiveness if you had a larger pool to choose from.”

Andy Howarth and Lora Baldracchi of WCHR agree that the fund has money to lend, but could get overwhelmed if there were a lot more requests.

For Biasi, the takeaway from his research was simple.

“You don’t need to spen[d] $2 million on this big fancy project to improve the neighborhood,” he said. “What this is essentially saying is there are people who live here who need their homes fixed and there’s positive spillover effect to other homes, why not in some meaningful way develop this? It’s cost-efficient.”

Disclosure: The author’s wife is employed by WCHR but neither administers nor works with the loan fund.

This article was originally published in the Dec. 9, 2015 edition of the Sun.