Marc’s village was bombed when he was 4 years old. As people scattered, Marc lost sight of his mother and sisters, whom he has yet to find.

He ran with his older cousin, also a young boy, all the while being shot at by militants. Elders found the boys and marched them out of the village, promising protection. The boys passed bodies strewn and piled along the path, many of them children. While crossing through a river, Marc’s cousin was shot and killed, his body falling backward and shielding Marc from bullets.

In the days following, Marc realized that he had been abducted by the elders. He was being forced to march with members of the Sudan People’s Liberation Army (SPLA), the military branch of a political group that has abducted tens of thousands of children and forced them to become soldiers. At a camp in Palataka, SPLA members whipped and water tortured him, and at one point burned him with metal until he lost consciousness.

He survived by dreaming of his family and remembering to be a good man of his tribe, as his father had taught him.

Unfortunately, Marc’s traumatic history is one of many horrific stories being lived around the world. A recent report from the African Union describes continued ethnic violence in South Sudan, including the existence of mass graves and perpetration of forced cannibalism. A 2013 State Department Human Rights Report from Syria noted: “2,963 documented cases to date of death by torture by the government, since … 2011, including 87 women and 27 children.”

And a 2015 Human Rights Watch Report on North Korea reveals multiple political prisoner camps in which offenders and their entire extended families are subjected to deadly conditions and physical harm. Even though these atrocities are well documented, the immigration process for those attempting to escape persecution is intensive and lengthy. 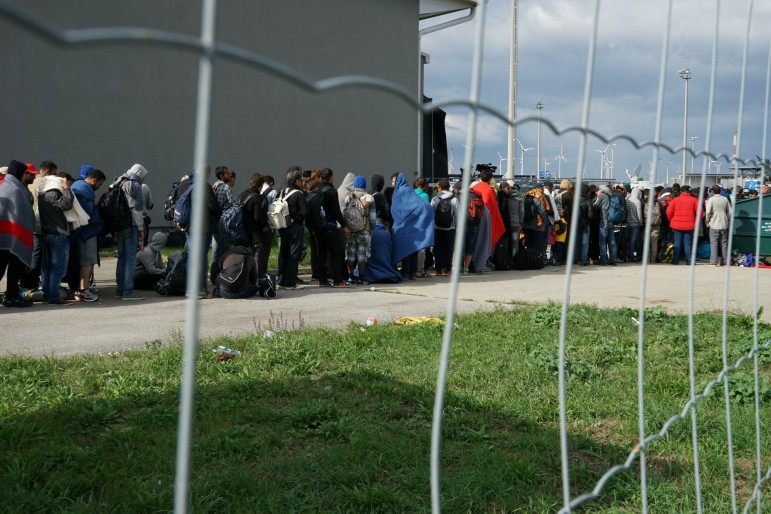 According to Section 101(a)(42) of the Immigration and Nationality Act, a refugee is a person who is “persecuted or who has a well-founded fear of persecution on account of race, religion, nationality, membership in a particular social group, or political opinion.”

An applicant for resettlement must apply to the United Nations High Commission for Refugees. If the applicant qualifies under the definition of persecution, and is not subject to any bars, then he or she will be referred for resettlement and lawful status in a new country.

Refugees resettled in the United States also undergo extensive security checks, including individualized interviews, screening by the National Counterterrorism Center, the FBI Terrorist Screening Center, and the Department of State, Department of Homeland Security (DHS) and Department of Defense.This process typically takes well over two years, while many applicants wait in war-torn regions. Some die waiting.

When Marc was 8, his father arrived one night and was able to steal him from the SPLA. His father was later murdered for this act. This encounter began Marc’s lengthy journey to the United States.

After wandering through more than 500 miles of jungle, Marc and his father arrived at Kakuma Refugee Camp. Marc was left there to spend 11 lonely years. At age 18, he was accepted by a U.N. refugee program and traveled to the United States with nervous excitement. Despite his great fortune in making it to the United States, Marc’s daily life of working and attending classes is still interrupted by unwanted memories of a childhood in the throes of war.

In spite of the crisis situation many people like Marc face in Africa, the Middle East and elsewhere, and in spite of the critical backlog of registered refugees who wait years for resettlement, politicians are calling for the slowing or stopping of refugee resettlement in the United States.

Proposed screening measures create significant delays that decrease the chance of survival among refugees. Meanwhile, these measures will do little to improve security. Such a defensive approach cannot prevent extremism and resulting terrorism at its root.

On Nov. 19, the House voted by a supermajority for sweeping measures that will substantially delay the entry of refugees from Iraq and Syria into the United States by requiring further assurances of safety from the FBI, DHS, and the Director of National Intelligence. [Editor’s note: the American Security Against Foreign Enemies Act of 2015 bill is not expected to soon be voted on by the Senate, and faces a White House veto.]

On the political front, candidates are attempting to outdo each other in the measures by which they will prevent the entry of refugees to our country. Massachusetts Gov. Charlie Baker indicated that he had “no interest” in welcoming Syrian refugees to the state. Twenty-seven Republican governors have written a letter to President Obama asking for the suspension of resettlement of Syrian refugees.

These efforts promote a false narrative about the life experiences and intentions of refugees, and this narrative poses grave dangers to both the United States’ global neighbors and itself. Proposed screening measures create significant delays that decrease the chance of survival among refugees. Meanwhile, these measures will do little to improve security.

Such a defensive approach cannot prevent extremism and resulting terrorism at its root.

The measures do nothing to address an ever-increasing sentiment of social and economic unfairness upon which extremist groups recruit young people in poorer regions, who feel marginalized, to resort to horrific acts. The rejection of refugees from safe-havens like the United States leaves vulnerable populations trapped amongst the ideology of terrorist groups, creating further opportunity for extremist control and destabilization of crisis areas.

Some may argue that refugees pose a large economic burden. This argument relies upon several misunderstandings.

First, many assume that refugee populations rely on public assistance for extended periods of time. However, the New York Times recently published an article revealing the resilience of displaced and traumatized populations: Despite the well-documented trauma experienced by those in the Zaatari Refugee Camp in Jordan, “[Syrians] have set up 3,500 shops, stores, and other businesses.”

The article also notes that members of a recent study group of former child soldiers from Uganda were more likely to be active citizens than those who do not experience childhood trauma. The engagement of resilient immigrant populations is characteristic of our success as a nation and essential to our position in the world.

Today’s national security challenges may be more dynamic, more consequential or more insidious than in the past. Many triggers contextualize (though do not excuse) the apparent increase in extremist behavior. These triggers are plentiful: Desertification and climate change cause fighting over resources; globalization causes increased geographic integration of people with different ideologies; technological advances pose more looming consequences in the instance of conflict.

But pinning fear about security on refugees is illogical — such a strategy is both inhumane and ineffective in preventing both economic loss and terrorism.

Right now, this narrative blames individuals who have no involvement in the extremism plaguing their homes. The narrative should focus on the real trauma of refugees like Marc, rather than speculation about future terror. If we don’t change our narrative regarding refugees, then we are complacent and therefore complicit with the atrocities happening around the world.

In speaking with Marc recently, he relayed an appreciation for the United States’ fear of terrorism, recalling that he witnessed the 1998 bombing of a U.S. embassy in Nairobi. But he noted that refugees such as himself should not be excluded from our country: One bad onion cannot spoil the batch.

Alex Mooradian is an attorney in Worcester and a Sun contributing commentary writer. He represented Marc (name changed for privacy) in the Boston University School of Law’s Immigrants’ Rights Clinic.

Alex Mooradian is an attorney focused on immigration and real estate matters at Glickman, Sugarman, Kneeland and Gribouski, here in Worcester. Alex has lived in the Main South neighborhood off and on for more than 15 years. He is a member of the pro bono immigration panel at Ascentria Care Alliance, and he recently joined the board of directors of nonprofit Jericho Road, Worcester. Alex speaks Spanish.

One thought on “Welcoming refugees in U.S. is the better way”