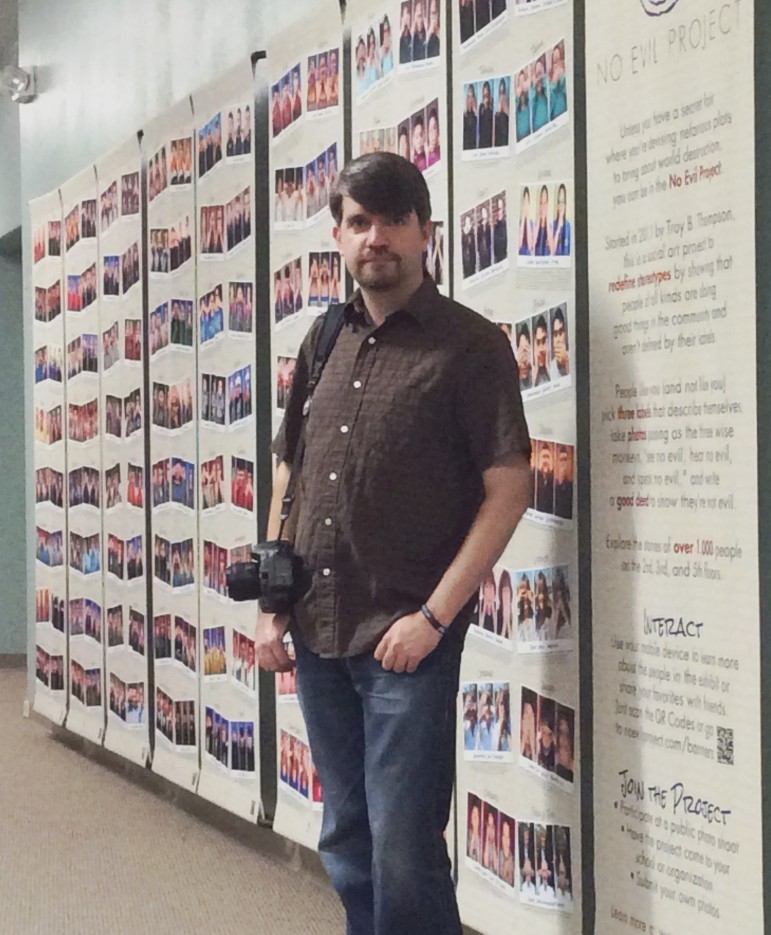 Troy Thompson, creator of the No Evil Project, photographed at the Denholm Building.

Troy B. Thompson has been making a positive impact in Worcester for years.

Long before social entrepreneurship was a thing, long before the words “recruit, retain and incubate” became the mantra of the Worcester Regional Chamber of Commerce, and long before the city of Worcester made it a stated goal to keep college students in the city, Thompson was doing his part to make the city a better place to live.

As a student at Worcester Polytechnic Institute in the 1990s, Thompson created socialweb.net, a digital home for listings of all things Worcester. It became the de facto social calendar for the city, area colleges, and even competing media companies.

After graduating, the Minnesota native remained in the city, maintaining socialweb and running  his own website design business Daedal Creations, which has designed websites for many local nonprofits and private businesses.

His latest labor of love, the No Evil Project, is garnering a lot of attention and is poised to become The Next Big Thing.

Thompson created the No Evil Project in 2011 “as a fun and lighthearted way to draw attention to the damage we do when we label and make negative judgments about people who aren’t like us.”

“Originally, it was going to be a few friends of mine doing this thing as [an] art project, and now I am just shy of photographing 5,000 people,” Thompson said in a recent interview. “It’s gone from me begging people to be photographed for it to organizations inviting me to photograph them” as a way to address diversity, bullying or self-awareness.

“You think about ‘Oh, I wonder what my labels are.’ And that leads to ‘I wonder how I label other people.’ So it’s much more introspective. To me, that’s really the important part.” — Troy B. Thompson

The process is straightforward, or so it seems.

Each subject would be photographed in three poses — “hear no evil, see no evil, speak no evil.” (Editor’s note: Think, the three wise monkeys.) Then the work begins. The subjects then must choose three labels that define them and then describe a good deed they’ve done.

“The photos are just the visual part,” Thompson said. “To me, the important part is thinking about the labels and the good deeds.

“You think about ‘Oh, I wonder what my labels are.’ And that leads to ‘I wonder how I label other people.’ So it’s much more introspective. To me, that’s really the important part. The photos are fun and it’s the visual, but that’s not where the thinking is involved and it’s not what generates the conversation.” 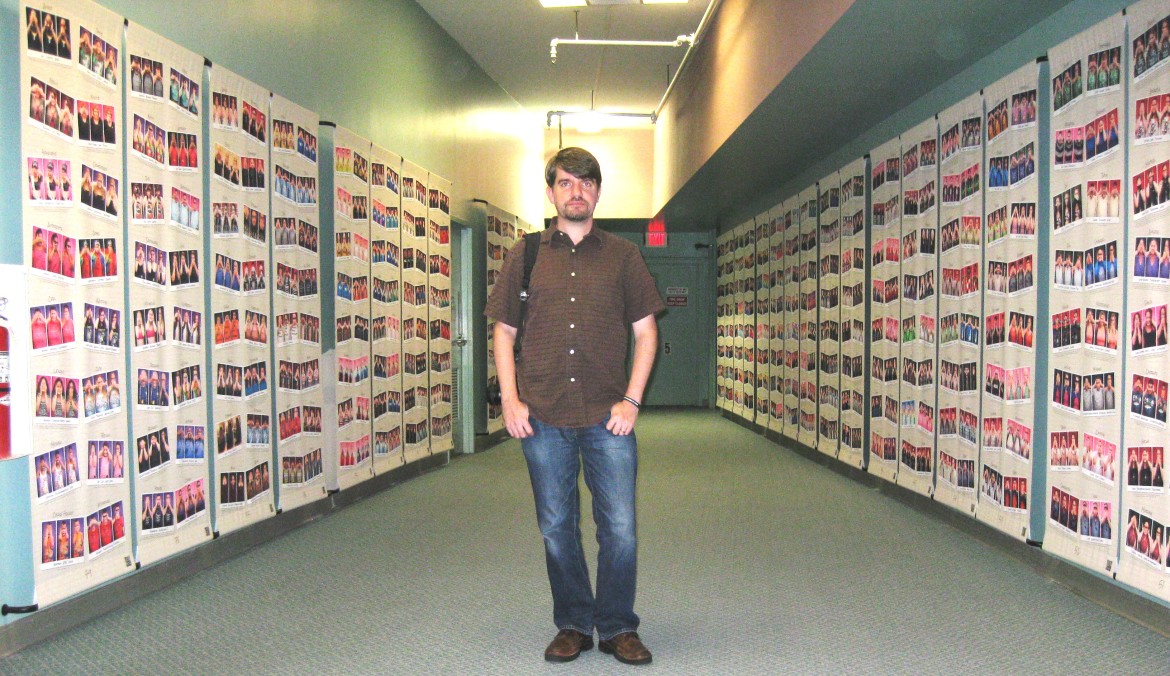 Troy Thompson, creator of the No Evil Project, stands among some of the 91 panels that make up his exhibit at the Denholm Building.

The first exhibit of the No Evil Project as art appeared on the walls of the Hanover Theatre for the Performing Arts. That showed 250 people. Earlier this year, with the number of subjects photographed more than 3,000, Thompson decided it was time for another exhibit.

One of the rewards for donating, in this case $1,500, was a two-hour photo shoot. This is when the fates conspired to present Thompson the perfect use case for his project. To get the full story, though, we need to go back a year to stART on the Street.

“Every time I thought about it, more [and] more things came out of it. This is so important for our students, for empathy, for critical thinking, I thought ‘We have to do it.’ That’s what we teach, decision-making. You can’t do this without being [a] critical thinker or problem-solver.” — Carol Manning, WPS health and phys. ed. liaison

Carol Manning is the health and physical education liaison for the Worcester Public Schools. She saw Thompson at stART on the Street last year.

“My husband did the pictures first. I didn’t,” Manning said. “I had pictures taken and I said, ‘Yeah, right, honey.’ Then (Thompson) sent me an email and it read, ‘pick out three labels’ for your husband. And it was so difficult to do, to describe someone, because every time you thought of something, it labeled them something negative or positive.

“And that’s what this is about, that all labels are neutral. … Every time I thought about it, more [and] more things came out of it. This is so important for our students, for empathy, for critical thinking, I thought ‘We have to do it.’ That’s what we teach, decision-making. You can’t do this without being [a] critical thinker or problem-solver.”

To Manning, the project was “a dynamic way to teach health.”

Northern exposure
Manning contacted Thompson and they began to brainstorm ways to get this project into schools where it could be most useful. North High was a good candidate, they thought.

“One of the things we were concerned about was the toll that the negative press was taking on the students at North High School. We wanted to give them an opportunity to share their voice, and so this project seemed like a natural.” — Jennifer Davis Carey, executive director, Worcester Education Collaborative

Jennifer Davis Carey is the executive director of the Worcester Education Collaborative, a nonprofit independent advocacy organization. She works in the Denholm Building, 484 Main St., home to an exhibit of the No Evil Project, and she saw the impact it had.

With the Kickstarter in full swing and Thompson in the building for a photo shoot, the idea of donating $1,500 for a two-hour photo shoot seemed like a good idea to Davis Carey, so she donated. The photo shoot was not for her organization; it was for North High.

“One of the things we were concerned about was the toll that the negative press was taking on the students at North High School,” she said. “We wanted to give them an opportunity to share their voice, and so this project seemed like a natural.”

And, just like that, Thompson, Manning and Davis Carey had a plan. The Worcester Public Schools and North High Principal Lisa Dyer quickly signed on.

“We had to get the OK from the principal, who was very excited about it,” Manning said. “She saw this as a very positive way for children to learn.”

“This is how this whole project has always been,” Thompson said. “It’s been very organic.”

Manning and health teachers Corinne Tsouvalos and Teresa DiStefano got creative to ensure as many students as possible could take part in the project, especially considering the photo shoot was originally scheduled for just two hours.

Tsouvalos and DiStefano “took the bull by the horns,” Manning said. “They really stepped up.”

The plan involved the teachers popping into English classes, the subject that reached the most students, in the four days preceding the Friday shoot. Their job was to tell students about the project and give them the paperwork to fill out.

“When we did Wachusett High School, I basically set up a booth in the cafeteria and photographed over the course of the lunch periods, but they wanted more than that,” Thompson said. “Needless to say, we didn’t do a two-hour photo shoot. We went crazy with it.”

On Friday, students who wanted to participate were allowed to leave class to have their picture taken. Nearly one-third of the student body, about 450 students, participated.

With students helping man five registration tables, Thompson was able to shoot everyone — one student and three photos — every 20-30 seconds.

“I actually went to the school the day Troy was taking pictures,” Davis Carey said. “I got to see the students lined up out the door to be a part of the project, all very excited and enthusiastic about it, all very positive about it, and seeing sides of each other that might not have seen or known about before. So in many ways, it was a community building project for the school in addition to being an art project.

“It was all that we had expected and more,” she said.

The results of the hectic day will soon be on full display at North High. A public reception will take place from 4-6:30 p.m. Oct. 7 at North, 140 Harrington Way.

The exhibit will give the entire school community — students, teachers and parents — a chance to see and reflect on what’s been done and how these students see others and, more importantly, themselves. 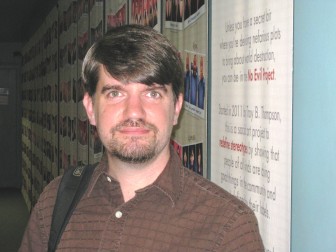 “We haven’t seen these kids be able to open up and talk about these kind of things,” Thompson said, noting that through the project he’s seen kids express things through labels that they haven’t been able to vocalize. “The stuff they wrote was just amazing. I really look forward to making that public.”

“I hope that (people) see that North High is a community of great kids with diverse interests, but also a community of individuals,” Manning said. “We hope that through this, they learn to be critical thinkers.”

This experience makes Thompson believe that the project could be useful elsewhere. “The reaction of the students and what they wrote makes me want to do it,” he said.

Manning agrees. “Oh, my goodness, yes,” she said when asked if she’d like to bring the No Evil Project to other schools. “I would love it in any of the high schools. I think you could do it in any grade. It might be a way to stop bullying.”

As for Thompson, he realizes he may be at a tipping point where the No Evil Project takes on a life of its own and needs to become more a business than a labor of love. Manning, for one, agrees. 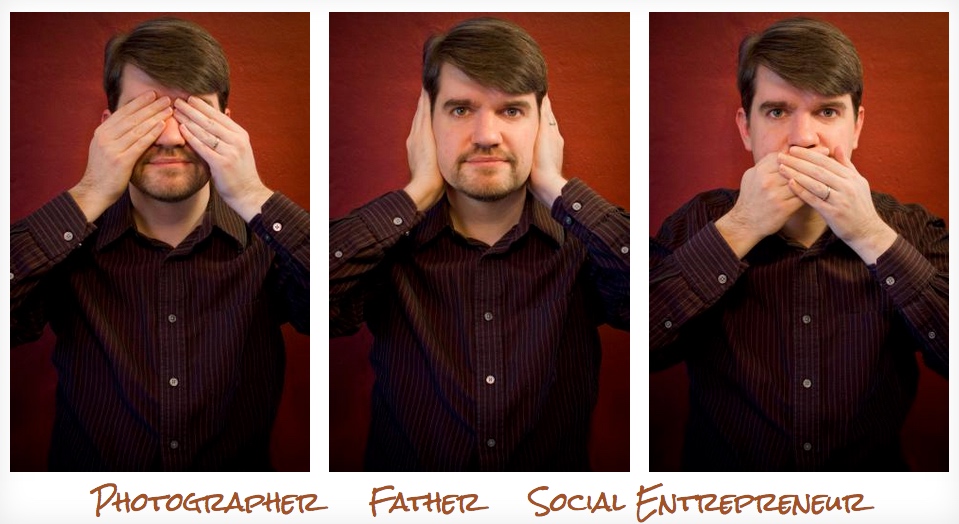 “I don’t think he knows how brilliant he is,” she said. “There are so many layers to this (project). You don’t realize it until you participate.

“I don’t think he knows how deep this can go. I know how it can help people.”

This article was originally published in the Sept. 27, 2015 edition of the Sun.