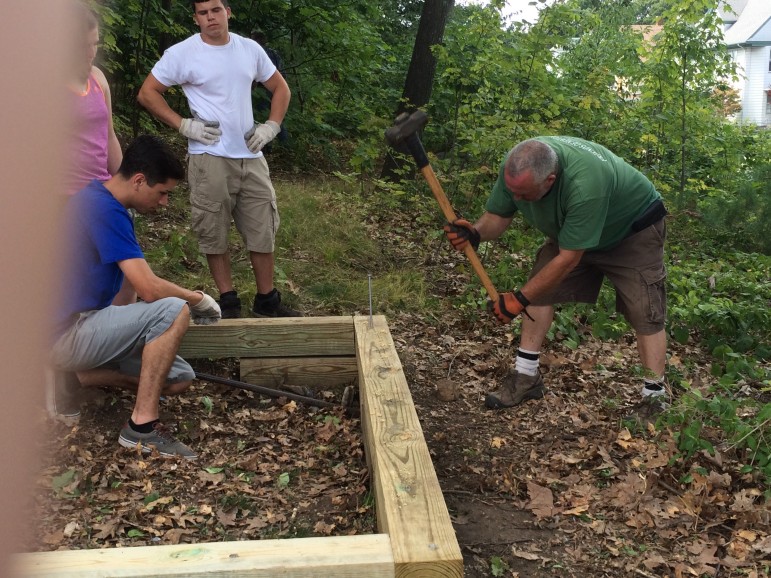 It takes a keen eye to spot a gem when it’s not polished.

Rick Miller, a transplanted Vermonter who moved down the street from Newton Hill in the late 1990s, had that eye.

The city had stopped caring for Newton Hill around the 1920s, Miller said. “It was a completely wooded forest. All the original trails were overgrown. There was vandalism, homelessness…”

Walking the hill, though, Miller saw the potential. A little work — OK, a lot of work — could make Newton Hill a prized spot in Worcester.

The Friends of Newton Hill was incorporated in 2001 and reached agreement with the city to clean and maintain the area.

“Our efforts are totally focused on this part of the park,” Miller said. “There are not a lot of groups that can match what’s been done with this group.”

Over time, the trails were cleared, and remain clear and clean to this day. A disc golf course was added in 2009 and that, along with the basketball court and tennis courts, made this spot the recreational area of Elm Park.

Said former Parks and Rec commissioner Thomas Taylor: “They have been working a long time improving Newton Hill. They are all volunteers, which makes this effort even more significant and making Newton Hill a viable recreation asset.”

A fitness circuit is the latest addition to the recreational offerings.

They’re hard to miss, those pits that dot the landscape in the Highland Street-Park Avenue-Pleasant Street triangle. There are eight, if you haven’t counted.

You can make out the landscape timbers, perhaps even the stone dust inside them. If your timing was good, you may have seen one or more of them being built over the summer.

As the days get shorter, the nights cooler and perhaps as early as a couple of weeks after the calendar confirms what we already know, which is that fall is here, the purpose of those pits, plus four others you can’t see from the road, will be plainly apparent.

The pits will be transformed into workout stations to create what could be best described as an outdoor gym. It will give new meaning to the term “planet fitness.”

The fitness circuit is the latest gift to Worcester residents from the Friends of Newton Hill, a nonprofit formed to “promote the restoration, maintenance and use of the Newton Hill section of Elm Park.”

The last part is sure to surprise all but the most diehard Worcesterites. Newton Hill is part of Elm Park. Indeed, two-thirds of the entire 60-acre park is west of Park Avenue.

Fewer people would know that if not for the hard work and dedication of the Friends of Newton Hill.

The idea for the fitness circuit is about 10 years old, Miller said.

“Basically this was an idea from a former Doherty teacher (Jose Garcia), who has since retired. It was his vision. We were looking for an opportunity for years to make this happen. He had this idea probably 10 years ago. It’s special.”

“We’ve been wanting to do this for years,” said Phil Bolduc, a member of the Friends of Newton Hill Board of Directors. “This year we thought, ‘Let’s make it happen.’ ” 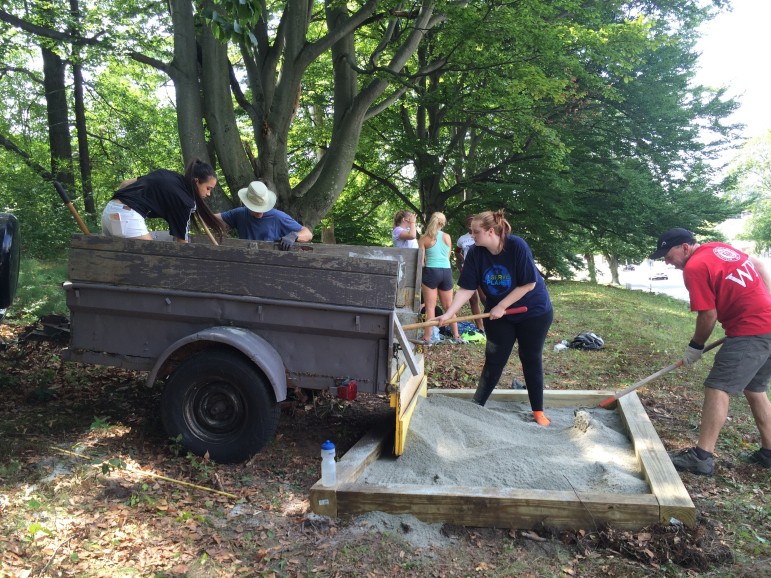 Volunteers pour stone dust in one of the final two platform boxes for the fitness circuit at Newton Hill.

“We wrote a grant proposal,” Bolduc said. The fitness circuit, it read, accomplished two goals: “to further the mission, increase positive usage of the park; and addresses the lack of exercise venues in an urban area.”

By designing the workout stations themselves and building them with help from volunteer labor, Bolduc said, the cost of the project was just $15,000.

“We’re saving a ton of money by designing it ourselves based on experience using workout equipment,” Bolduc said. Buying the equipment would have added between $12,000 and $24,000 to the cost of the project, he said.

Wrote Bolduc on the organization’s website: “With a Friends-of-Newton-Hill-style approach, we will bring together local benefactors, student volunteers, and our board’s expertise and commitment to make this a first-rate, long-lived asset to the health of our beloved park and the people of Worcester.”

The Friends approached the George F. and Sybil H. Fuller Foundation, which agreed to donate $10,000 if the group could secure the balance, Bolduc said. Two local businesses, SpencerBANK and Serrato Signs, stepped up to complete the funding.

The Parks, Recreation and Cemetery Commission was “very receptive” to the idea, Miller said. “Much like disc golf, we showed we had a good plan, funding in place, and a plan to build it and a plan to maintain it. It’s hard for them to authorize it without a plan for it being maintained.”

The city was very cooperative, Bolduc said. “They had reasonable questions. But they’re very supportive of what we’re doing. They are partners in the work we do.” The final sign-off came in June.

“Their plan was well thought out,” said John Lauring, member of the Parks Commission. “They had multiple contingencies in place for possible problems down the road, and the fitness circuit was great, in that it has multiple exercises for different levels of  the participants at each station. So its not a ‘one size fits all’ type of circuit trail.”

The first 10 boxes were installed by the Park Stewards Summer Work Program, the final two last weekend with the help of a dozen student volunteers from Worcester State University.

The piping needed to build the equipment for the station arrives this week, Bolduc said. The group is coordinating volunteers with the owner of the Bobcat needed to install the equipment and signs. The target, he said, is to complete the three-day installation during the last week of September and first week of October.

“This is a great example of the benefits to the citizens of our city from public/private partnerships,” Worcester City Manager Edward M. Augustus Jr. said.

The end result will be “a good physical workout in a beautiful natural setting,” Miller said. He’s convinced the circuit will increase positive recreational use in a beautiful city park. 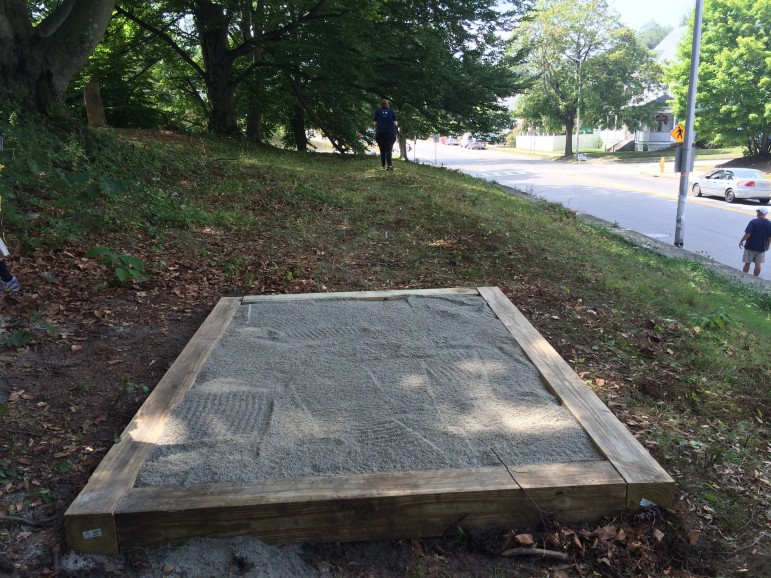 One of the final two platform boxes for the fitness circuit at Newton Hill.

The Friends-of-Newton-Hill style required a lot of partners over the years, Bolduc said.

“That’s been our saving grace, college students and local volunteers,” Miller said. “We try to keep something going on up there. … We’ve always been able to get good volunteers. It takes a lot of work.”

Over the years, students from Worcester State, WPI, Clark University and Assumption College have lent their efforts to the cause.

“This past spring, students from Worcester State University, coordinated by the Honorable John J. Binienda Center for Civic Engagement, helped to plant a perennial flower bed around the Newton Square World War II Memorial,” the group said in a release. “Worcester State University has supported the Friends of Newton Hill’s efforts by helping to coordinate volunteer work for its students since 2011.

“Other local colleges have also taken advantage of Newton Hill’s abundance of volunteer opportunity. Students from Worcester Polytechnic Institute’s Alpha Phi Omega Service Fraternity helped to shovel out the Newton Square Memorial and to paint the park benches in Newton Square this past spring. Students from Clark University and Assumption College helped to shovel out Newton Square’s basketball court in late March, making it spring’s first usable outdoor court. And, students from Assumption College frequently intern with the Friends of Newton Hill, performing a number of parks maintenance activities.”

In addition, local benefactors, the city and Park Spirit, a nonprofit advocacy group for Worcester’s Parks of which Friends of Newton Hill is a member, have time and again proven to be friends of Friends.

As for the future, the core group is the Board of Directors, five of whom (Miller, Bill Bernhardt, Kevin McCormack, Steve Hopkins and Luke Roberts) are founding members.

“There’s not an active membership that extended beyond the board,” Bolduc said, “but we’d like to expand the base, hopefully spread the word to get more memberships.”

The Friends of Newton Hill are expanding their reach with slick website, an active Facebook community and on Twitter. This is all thanks to one of their younger members, Brittany Legasey.

For now, the Friends are content with their work. In August they recently completed their 13th season of the Newton Square Concert Series, a West Side staple. They just finished Phase 1 of the Fitness Circuit Project, and the finish line looms.

This article was originally published in the Sept. 6, 2015 edition of the Sun.