WORCESTER  —  While most people dream of doing great things, others let reality intervene to create those dreams.

William T. Sharp, CEO of DxNow, Inc., definitely belongs in the “others” category.

His company, at 1 Innovation Drive in the North Main business incubator corridor, mirrors its founder’s entrepreneurial spirit of cooperation and collaboration. In this business, geography does not exist, biotechnology boundaries are invisible, and life sciences is the bold new frontier.

Yet the work of DxNow, which may seem to be more akin to an Arthur C. Clarke science fiction novel, is very real and beneficial to thousands of home-based dialysis patients now, and maybe millions of people and animals in other medical areas in the not-too-distant future. 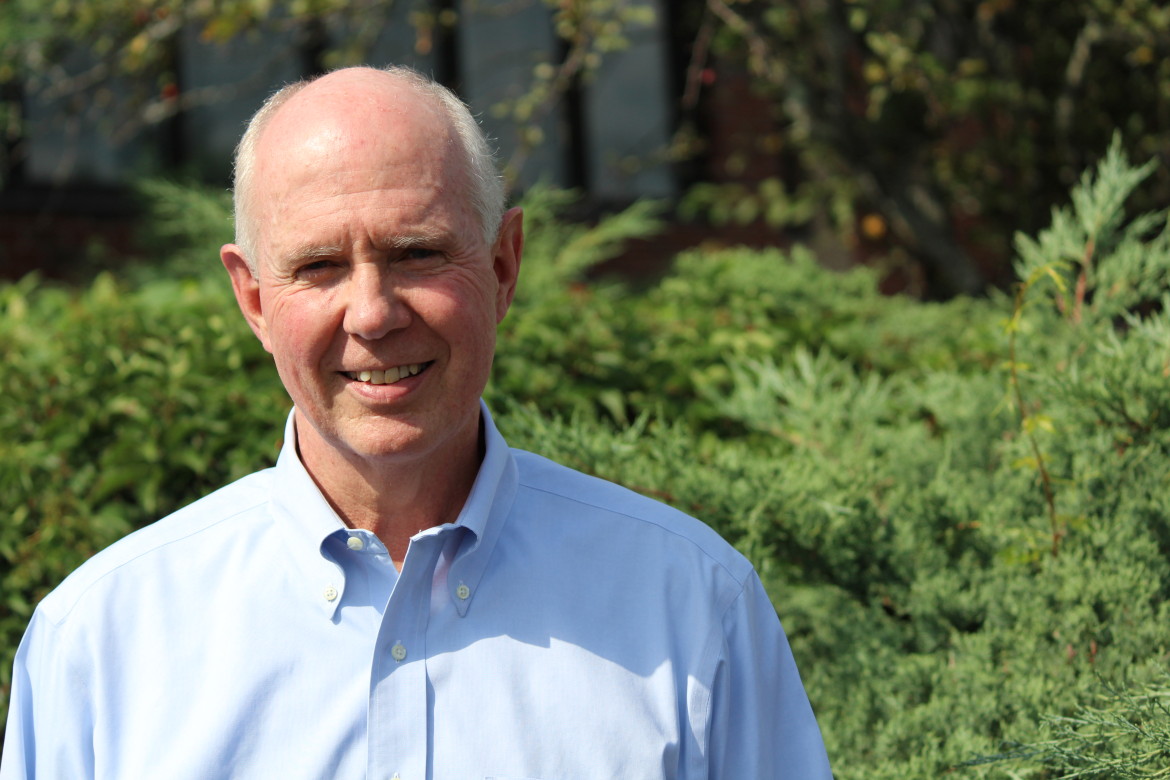 Art Simas / For the Worcester Sun

Sharp, 63, grew up in Baltimore and bucked the family tradition of working for the railroad. He opted for Norwich University, a military preparatory in Vermont.

With the Vietnam War coming to a close and a low draft number, he felt that if he was chosen to serve his country, it was going to be at the officer level. But a back injury sidelined those aspirations and he opted to take a medical discharge from the armed services.

He then went to Penn State, finished his undergraduate degree and enrolled in a Master’s program in Training and Development, hoping to work at the secondary or college level in education. The first of several serendipitous moves would take him to Hartford, and the Hartford Insurance Co., where he spent nearly four years in actuarial operations and marketing.

A friend lured him to San Diego in the early 1980s to work on commission for a company that helped pioneer the use of electronics in medical devices.

A seemingly never-ending string of recruitment opportunities provided Sharp with more business knowledge about the new life sciences field, although he was mainly on the sales and marketing side. Nevertheless, he succeeded at every stop, and co-workers as well as competitors took notice.

Fast-forward to the founding of DxNow three years ago, with a procedure that helps patients that must undergo peritoneal dialysis.

Sharp said: “Today, we have two different methods of dialysis: hemodialysis and peritoneal dialysis. Globally, there are about 3 million people on dialysis. In the U.S., probably about 550,000-plus … of that, approximately 35,000 are on peritoneal dialysis, which is a home-based therapy. The patient goes to the clinic about once a month, gets checked out and gets a new supply of materials and maybe an adjustment to the dialysis solution, and they go home and they do their own treatment.”

Sharp explained that “hemodialysis (HD) is center-based. One typically goes to a clinic or dialysis center three times a week, for four to six hours per session. The session themselves may last three or four hours, but because of the significant risk of hypotension to your circulation system with the amount of blood through the dialyzer through time, you have a higher risk for hypertension. So you want to make sure the patient is medically stable before you send him or her home.

“Peritoneal dialysis (PD) is more biologically friendly because you are using the peritoneal membrane, along with the dialysis solution to effect what the kidney would do. So people who are on PD are much more mobile and are able to maintain normal work schedules, and you are not inconvenienced by having to go to the clinic for dialysis therapy,” Sharp explained.

“In 2013, we agreed to find a better method to detect infection for these patients. We did market research, talked to clinicians and really walked away with the feeling that there is a tremendous need, and if we build it, we can have success and a better quality of care for these people.” — William T. Sharp, DxNow CEO

Patients with PD are likely to have other medical complications, though, such as diabetes, which have their own contributing factors, so their visual acuity may be compromised.

Another problem is the medications taken may cause cloudiness in the effluent, when there is no issue going on whatsoever and there is no infection.

Sharp said the average PD patient in the U.S. spends about 12 days a year in the hospital, primarily from infection-related issues.

“That’s a huge expense to Medicare and Medicaid because in the U.S., regardless of your age, if you have end-stage renal disease, you are covered under Medicare or Medicaid. So while many people have primary insurance, if they cannot afford the services, Medicare or Medicaid picks up the bill. And we’re spending tens of millions of dollars for the cost and care of these patients.

“In 2013, we agreed to find a better method to detect infection for these patients. We did market research, talked to clinicians and really walked away with the feeling that there is a tremendous need, and if we build it, we can have success and a better quality of care for these people.

“So that was the genesis of our decision to start the company,” Sharp said.

The person most responsible for the improved outcomes of PD patients is a Turkish-born engineer, Utkan Demirci, Ph.D., now 37, who, three years ago, was running a lab with 20-plus people at the Harvard Medical School. Concurrently, he was also an employee of Brigham and Women’s Hospital in Boston, and his immediate supervisor was the head of the renal department at the Brigham.

Sharp was introduced to Demirci by a colleague as an academic with interesting ideas. “My first reaction was ‘Great, another academic,’ because oftentimes technology that comes out of academic labs are often cool and interesting, but difficult to know how to apply them in a commercial sense.”

Demirci is a co-founder, board director and scientific advisor for DxNow.

He also conducted clinical experiments in other areas, such as male fertilization techniques to isolate and urge motile sperm to mimic their natural travels in a laboratory setting.

These experiments have also produced encouraging clinical results in dogs and horses. Veterinary medicine is less regulated in terms of testing current human therapies for applicability to animals.

Sharp said he and his colleagues are working with Colorado State University on a research study with horses, and the data will be presented at a large veterinary conference in January.

Based on the early returns, they believe they’ll have results that will be very compelling to that community.

Still another potential application that could become available to law enforcement agencies is technology to identify perpetrators of sexual abuse and rape.

Sharp said colleague Lenny Klevan, who holds a Ph.D. in chemistry from Yale and is also a board director and senior advisor for DxNow, is an expert in forensics. He has been running multiple billion-dollar businesses focused on human identity and genetic identity testing.

Klevan has been working with a differential extraction process that significantly speeds the time to positively identify a suspect.

In the past, law enforcement agencies had to collect 30 to 100 samples, then select 3 for testing which would be the most likely to identify an individual. “They’ll take these and go through the differential extraction process, which will take 6 to 10 hours where they have to separate and quantify the male from the female cells,” Sharp said.

“But until they (law enforcement) get to the end of this process, they still don’t know if they have enough material to continue with further analysis, which is time-consuming,” he continued.

According to Sharp, Justice Department officials around the world have said problems with differential extraction are a major bottleneck in prosecuting sexual assault cases.

“Basically we filed for a provisional patent last fall based on Lenny’s chemistry that marries the microfluidics that we’re using in sperm-sorting, which is a similar concept because we’re working off the same design in separating the motile sperm. We’ve been working with real live samples from a crime lab – and some of these samples are 12 or 13 years old.

“We’ve been able to work with samples that are that old and demonstrate a much higher capture efficiency than what they are getting in their current process.

“And this procedure takes 15 minutes of processing time,” Sharp said.

“Unfortunately with recidivism rate, the sooner you can ID the perpetrator, the quicker the law can get him off the street. That’s been our driving force,” Sharp said. “Obviously, it’s a large commercial opportunity as well as a side benefit.”

Sharp said, “The bottom line is (at DxNow) we’re going to make a difference in many people’s lives.”

With such lofty goals clearly in sight, Sharp said that while the firm’s presence in the city will be maintained, he will likely move some of the operations (research and development) to Maryland next year, to take advantage of favorable investor options that include handsome credits for up to $500,000 of invested capital.

The Worcester facility will likely remain for the long term, the CEO said, but Sharp, as always, has his eyes focused on the future — guided by the surprises of biotechnology.

This article was originally published in the Aug. 30, 2015 edition of the Sun.

Art Simas spent more than 25 years in a number of roles at the Telegram & Gazette. After several years as a news reporter, he graduated to the copy desk. From there he went on to become a special sections editorial manager for the marketing and new media departments, where he spent the last seven years of his T&G tenure. He has a long history of covering myriad subjects in the city and currently freelances for a number of regional publications.